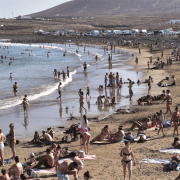 Lanzarote needs tourism to survive, and the Spanish Government’s announcement that quarantine restrictions will be lifted on foreign visitors from 1st July has raised hopes all over the Island. But how far are we from normal service being resumed?

While Spain may be open from July 1st, few on the Canaries expect to see many tourists in that month. The consensus here is that things will not start getting back to normal until August or September. To re-establish international tourism, several things will need to be sorted.

Tourism will not return from countries whose own quarantine regulations remain in place. This will rely on the progress of the pandemic in those countries and the measures taken by their governments. So far, the UK lags behind several other countries, and further difficulties could be caused by the fact that Spain has stressed that it hopes for agreements at European level, rather than with individual countries.

There’s only one practical way to come to Lanzarote, and that’s via the airport. While a number of airlines have expressed their enthusiasm to resume routes to Spain and the Canaries, this will depend on many factors. The good news is that fuel is now cheaper than ever, so expect low ticket prices.

Many potential tourists are expressing concerns about the risks of coronavirus on flights, and the Canaries wishes to make safety one of its key selling points. Regional President Ángel Víctor Torres has called for PCR tests before departure, and tracking and tracing apps for all visitors while they’re here.

These measures, however, could be expensive and time-consuming. Faster, cheaper antibody tests require blood samples, which many tourists will dislike, while temperature checks are of limited use.

If all goes well, the Canaries will leave Phase 3 by 22nd June. This permits internal flights in “safe corridors” within and outside of Spain. However, other Spanish areas may be delayed, among them the vital hubs of Madrid and Barcelona.

Tourist destinations on mainland Spain don’t have a winter season, and they are desperate to get some profit from this summer. The Canaries has appeared more inclined to caution precisely because the season here lasts all year.