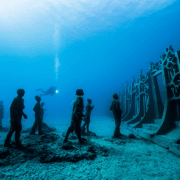 The Cabildo has announced that it will close the Atlantic Museum in Playa Blanca as well as the Casa Amarilla exhibition space and the Archeological Museum in Arrecife. None of the three centres will continue to be listed among the official Centres of Art, Culture and Tourism of Lanzarote, which will instead revert to the original centres created by César Manrique.

The underwater sculptures by British artist Jason De Caires that form the Atlantic Museum gained worldwide publicity for Lanzarote when they were opened to the public three years ago. However, last year it was announced that an average of 19 people a day visited the attraction and that it had lost over €45,000 in the first five months of the year.

The Cabildo has cited the losses as reasons for the closure, but also stated that none of the three attractions have anything to do with César Manrique, and thus should not have been included in the official Centres of Art, Culture and Tourism (CACTs) on the island.

Benjamin Perdomo, the councillor in charge of the CACTs, said that he was pleased to announce that the Atlantic Museum would now be free for anybody to visit, adding that he’d be happy to announce a tender for the service just to demonstrate that no private company would take it on.

There is also a political aspect to the decision, as all three centres were opened under the the rule of Pedro San Ginés of the Coalición Canaria.  San Ginés was strongly criticised for paying €1.6 million for the building used for the Archeological Museum, while involved in a relationship with the daughter of its owner, and the arrangements that led to the opening of the Atlantic Museum have also been controversial.

Lanzarote’s tourism business association, Asolan, has said that big hotels are unlikely to reopen in July or even August, despite the Spanish government’s recent invitation to foreign visitors to “plan their summer holidays.”

Paco Martínez, the Vice President of Asolan said “It doesn’t look like it’s going to be easy. We need at least 50% occupation to break even, and we’re very far from guaranteeing that number of reservations in July.” Things look “a little better” for August, but reservations are still not sufficient for many hotels to reopen.

Martínez said that he supported tests at origin “even if its just temperature checks”, but testing all tourists is “very complicated”. “I don’t think it’s  feasible to carry out tests on every tourist at the airport, and if they do it a few days earlier, what happens between then and the time they fly?”

Talking of Lanzarote’s largest market, the United Kingdom, Martínez said “They have had more deaths than Spain and there’s a certain liberty over there because their lockdown hasn’t been as drastic. There’s talk of reopening flights within a month, but if they send us 10, 20 or 30 flights  which is normal for a Thursday here, that’s 7,000 or 8,000 British tourists. Is there really no risk to us?”