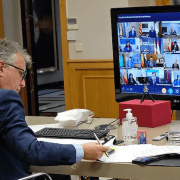 Canarian President Ángel Victor Torres appears to have accepted that tests at origin on all tourists to the Canaries are unlikely to happen. He has also admitted that the Canarian government does not have the power to introduce tests on all arrivals, and that Spain’s health department will not allow “indiscriminate” testing of all passengers at their destination.

Torres has insisted strongly that tests should be carried out at origin for weeks, and his demands have become a regular feature of the annual video meetings that take place every Sunday between Spain’s national government and its regional leaders.

However, yesterday he acknowledged that the absence of any agreement on the issue within the European Union, and the Spanish governments’ failure to adopt such measures domestically, meant that tests at origin “will not be possible”.

Torres’ recent pledge that “if they won’t do it at origin, we’ll do it on arrival” also appears to be impossible to fulfil, as this decision requires the agreement of the Canarian Health Service and the Border Health department- a part of Spain’s Health Ministry.

The Health Ministry has stated that any tests carried out on arrival must be “selective” rather than “indiscriminate”. The likely measures that have been agreed by both authorities are temperature checks and health declaration forms filled in by passengers. Clinical tests are only likely to be carried out depending on the results of these, and certiasn other criteria such as whether the plane arrives from a zone with a high infection rate.

Torres recognised this yesterday, saying “We don’t have the powers to introduce tests on arrival for tourists”. Nevertheless, he believes that temperature checks and declarations are “insufficent” and said “we’ll fight to achieve tests at origin or arrival until the last minute, because it will give security to the tourist and to all Canarians.”

The failure to guarantee tests at origin will deal a blow to the Canarian government’s wishes to develop a unique brand of tourism based on safety. However, it’s also true that Canarian politicians were never clear about how tests at origin would work, how they would be would funded, or even which type of tests would be carried out.

The Great Outdoors
Scroll to top