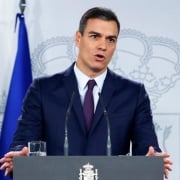 Spain’s President Pedro Sánchez has announced that Spain will will open its borders to 30 European nations from next Monday, 21st June. Although the agreement applies primarily to nations in the Schengen area, the Spanish government also confirmed last night that UK and Irish citizens would also be able to enter Spain from the same date.

The announcement means that, from next Monday,  citizens of almost all European countries will be able to enter Spain without having to enter quarantine.

Iceland, Norway, Liechtenstein and Switzerland are non-EU members in the Schengen area and will also be granted entry; while Ireland, Cyprus, Romania, Bulgaria and Croatia are EU members who have not signed the Schengen agreement, and will also be permitted to enter. The United Kingdom has been included in the last group by virtue of the post-Brexit transition period.

This is a unilateral decision by Spain  and does not mean that Spanish citizens can enter the other countries freely yet. For example, the UK currently insists that all foreign arrivals quarantine themselves, and this policy will not be reviewed until June 28th.

Portugal will open its border with Spain on July 1st, after a special request by the Portuguese government to delay the measure. A special ceremony, attended by King Felipe VI and Portugal’s President, Marcelo Rebelo de Sousa, will mark the occasion.

Other countries will also be permitted to enter from July 1st, as long as reciprocal agreements exist, the health situation is favourable and adequate sanitary  measures are observed at departure, in transit and upon arrival.

Canarian President Ángel Victor Torres has announced that the Canaries will enter the “new normality” this Thursday.

Torres said that the Canaries has “passed the worst” and indicated that the regional government would approve the transition to the new normality on Thursday, three days before the national State of Alarm expires.

This means that from Thursday, the Canarian government will have the same amount of control over its territory and policies as it did before the State of Alarm was established on March 14th. Torres has already pledged to present plans to recover the tourism and motor sectors on Thursday.

It is already clear that several Spanish regions will introduce their own controls as they adapt to the new normality. A recent outbreak of coronavirus in a Bilbao hospital has scuppered plans for a northern “safe corridor” between Navarra and Galicia, while Madrid, which has been highly critical of the national government’s refusal to allow it to progress through the phases, has announced that it will apply to enter Phase 3 on 22nd June. As this is the day on which the State of Alarm will have end and the phases will no longer apply, Madrid will impose equivalent Phase 3 measures itself.

Make friends and discover Lanzarote on a bike!
The new normal indoors