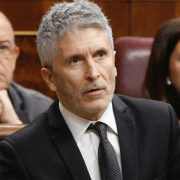 Spain will close its land borders from midnight, admitting only Spanish nationals, foreigners resident in Spain, cross-border workers and others who can prove that their entry to the country is necessary or unavoidable.

This measure will remain in place until the end of the state of alarm declared on Saturday night. It is now almost certain that this 15-day “lockdown” period will be extended considerably, after Transport Minister José Luis Ábalos said it was “obvious” that the measures would have to be extended.

Interior Minister Fernando Grande-Marlaska, announcing the measure, said “The aim is none other than to protect the heath and safety of citizens and prevent the spread of coronavirus.”

The measure means that the airlines that continued to bring tourists to Lanzarote and other Canary Islands will no longer be permitted to do so. President of the EU Commission, Ursula von der Leyen, has proposed a 30-day ban on “non-essential” flights.

Meanwhile, a government statement is expected tomorrow to address the situation of the huge amount of workers who have been dismissed by their employers today.

Emergency calls from the wild
Lockdown: can I, or can’t I?