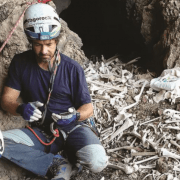 The discovery of 72 skeletons in a cave in Gran Canaria has been hailed as the “archeological find of the century”.

The cave was first located by members of the archeological association El Legado, who used drone technology to explore remote and inaccessible crags in the mountainous Guayadeque region of the the island, where other ancient remains have been found in the past.

Their drone located a cave, which they later managed to explore, climbing more than 75 feet down a rock face. The cave was found to contain remains of 72 human skeletons, including the bones of ten newly-born babies.

“Exceptional and fabulous,” was the response of Xabier Velasco, inspector of historical heritage at the Cabildo of Gran Canaria; and archeologist Verónica Alberto as they formally presented the results of the preliminary investigations of the cave.

Carbon 14 tests on some of the bones and fabric have established that they belonged to people who lived on Gran Canaria around a thousand years ago, between the 9th and 11th centuries AD. This means they are likely to be members of the Guanche people, one of the original tribes who settled the islands.

Scientists hope to be able to find out much more about the lives of the Guanche inhabitants of the islands by analyzing the remains. They have already discovered that some skeletons show signs of arthrosis – damage caused by the breakdown of cartilage in joints due to ageing – and one male skull shows evidence of having suffered a possibly fatal blow.

The bones were found in a disordered state, separated from the animal hides and fibres that were often used by the Guanches to mummify their dead. Researchers believe that this shows that the burial site has been disturbed, but not pillaged. They also believe that this could have taken place many centuries ago.

Researchers have already expressed interest in the discovery of children’s remains among those of adults, as this is a phenomenon that has not been found in previous burial sites.