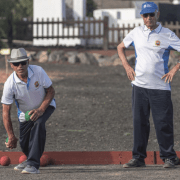 Canarian bowls is the most popular Canarian traditional sport. So last month the Gazette’s Shaun Addison and Sabrina Suppers enjoyed the atmosphere at one of the island’s biggest bowling events.

Every Wednesday afternoon, the Albergue de Tegoyo near Tías is invaded by coaches from every corner of the island. Hundreds of older Canarians descend on the well-kept grounds wearing specially-designed uniforms, and soon the clacking and clunking of wooden balls colliding or hitting the wooden walls can be heard over the buzzing hubbub of contented, social conversation.

This is the Torneo de Abuelos Conejeros, which roughly translates as the Lanzarote Grandparents Tournament, and it’s a hugely popular and well-established event. In fact, after football Canarian bowls is the second most popular sport on the Canary islands in terms of federated participants.

It’s also a proud Lanzarote tradition. This island is widely regarded as the originator of the current bowling tradition, which has since spread to all the other islands. You can sense a little of that pride at Tegoyo, as players over the age of 60 compete in dozens of simultaneous games. Little dramas unfold on every pitch, as bowlers carefully roll their bowls or hurl them in an attempt to knock opponents bowls out of the way.

This is the 20th year of the tournament, which involves teams from every municipality on the island, as well as the isle of La Graciosa. Over 800 players will participate in the tournament, and the Tegoyo pitch has been busy every almost every Wednesday afternoon from November until the finals at the end of this month.

A different municipality hosts the event each year – last year, for example was Yaiza’s turn, and the southern town saw their women’s team, La Huerta Vieja de Yaiza, lift the trophy alongside the male champions, Los Picachos de Haría. Both teams won trophies and a fully-paid-for weekend trip to Tenerife.

Although there’s a keen sense of competition at the tournament, and it’s taken seriously by everyone concerned, this is still primarily a social event. The real competition started at the end of March as the Federation of Canarian Bowls began its league, which culminates in July.

The federated games are where you’ll find the really decent players, the ones who can hit an opponents bowl unerringly at a distance of twenty metres, and the ones who’ll travel between all seven islands competing.

But at Tegoyo, as the games come to an end and the pensioners walk into the marquee for a snack and a drink, you understand that the real heart of this sport is social, a warm, glowing slice of Lanzarote tradition.