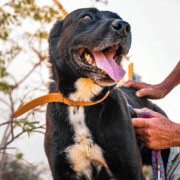 Dani is a medium-large labrador mix, born in September 2014. Dani was taken off the Arrecife streets when he was found abandoned and has spent the last five years in a small cage in the Arrecife Perrera, where he was never exercised.

Having finally been adopted from there he was handed in a week later to Sara, where he is already a great favourite. He’s good with other dogs, loves people and takes treats very gently. His walkers say he is very calm, uncomplicated, kind, handsome and gentle.

Let’s hope this wonderful dog doesn’t have to wait too long for a decent, loving home – at his age, and with his history, he so deserves it.