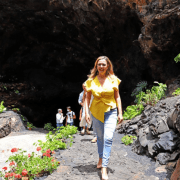 Lanzarote’s Centres of Art, Culture and Tourism will reopen to the public tomorrow, and the event will be marked with ten free open days for all residents of Lanzarote.

During  the several weeks of closure in the lockdown the centres have been renovated, repainted and disinfected, and now the Cabildo wants to give locals the opportunity to rediscover places that many of us end up taking for granted.

Cabildo President María Dolores Corujo said “We want you to feel the magical atmosphere that you can breathe at the centres once more; to marvel at these places that were created by nature and moulded by César Manrique, and to rediscover a group of works that make Lanzarote a unique destination. Al in all, we invite  you to enjoy Manrique’s work in all its grandeur in a perfectly safe manner.”

Corujo also highlighted the dining opportunities at the centres, saying “We want to surprise island residents with a gastronomic offer centred on local products and enriched with the creativity of chef Orlando Ortega, which is accompanied by a extensive range of locally-produced wines, beers and spirits.”

Positive tests for Covid-19 were returned on 14 of migrants who arrived on a patera (boat used by migrants) to Fuerteventura on Sunday. However, the downward trend on the islands still continues, as 17 cases were discharged. Only one other new case was registered on the islands.

The patera, which had 35 people on board, was intercepted by the Salvamar vessel Nizar several miles off the coast of Fuerteventura on Sunday, and the passengers were immediately quarantined in warehouses. After testing, 14 individuals, including a child, tested positive, and these have been isolated.

This incident, along with the two cases detected on a patera arriving at Lanzarote recently, suggest that official figures from Morocco are highly unreliable. The 16 cases detected on pateras arriving at the Canaries outnumber the Moroccan government’s official tally of 10 cases for the two large provinces where pateras usually set sail from.

Passing the test
A glimpse of the future

How to disinfect a car
Scroll to top