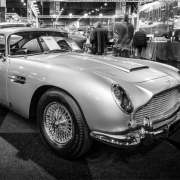 James Bond’s most iconic car, the Aston Martin DB5 from Goldfinger has been recreated by the British company, with all the original features of the model in the film.

The DB5 Goldfinger, which Bond drove across the Alps to Switzerland in the film, is a replica of the original car, which was produced from 1963-1965. However, it will also have all the added extras that Q installed, such as smoke and oil dispensers, bulletproof shields and an ejector seat.

25 of the special models will be made until the end of the year.

Make friends and discover Lanzarote on a bike!
New mask laws: What you need to know