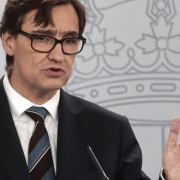 Spanish Health Minister Salvador Illa yesterday explained that the rise in outbreaks in the country was “a different situation to the one in March and April”.

Illa stated that there were currently 412 active outbreaks involving 4,870 positive cases in Spain, 70% of them located in the regions of Catalonia and Aragon. Most outbreaks resulted from social events such as family reunions, nightclubs and parties, and Illa urged citizens to continue to take special care in these situations, observing distancing and washing hands regularly.

Illa said we were not seeing a return to the “nightmare of last spring” because the majority – 60% – of positive test results are asymptomatic. “This means they are being detected by screening and tracing,” said Illa, “The system is working.” He claimed that Spain was carrying out an average of 42,000 PCR tests a day, with 48,000 every weekday.

Illa also said that the average age of positive cases had fallen from 65 in March to 40 in the last five weeks. “The cases we are detecting are milder,” he explained “and few of them require hospital attention.” Illa pointed out that there were just 209 coronavirus patients in intensive care in Spain, and deaths remained low. 10 people died of coronavirus in the last week in Spain, a figure far removed from the 950 who died on one grim day (April 2nd) at the height of the crisis.

Illa concluded by saying “There have been outbreaks in all countries and they will probably keep occurring until we have a treatment or a vaccine.  The virus remains among us. The regions have the necessary tools and are acting correctly. Measures are being taken.”

Possible extension of mask use in Canaries

Meanwhile, in the Canaries, government spokesman Julio Pérez said yesterday that the regional government is considering extending compulsory mask use “to areas where it currently doesn’t apply.”

The Canaries are currently the only Spanish region that has not made mask use compulsory indoors and outdoors, after Madrid recently decided to introduce a stricter law following an alarming rise in new cases.

However. Pérez hinted that the rule may not make wearing masks outdoors compulsory. “What we’re worried about is young people, families, enclosed premises, more than going out and seeing 4 people out of 100 not wearing a mask in the street.”

Airport updates
Smoking – Only for the lonely