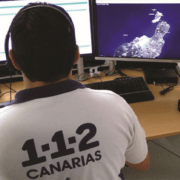 Everyone on Lanzarote and the Canaries should know the 112 number for emergencies off by heart, especially if they’re used to the 999 number in the UK.

112 was established as a universal emergency number in EU countries in 1972, and it was chosen for two reasons.

First, it was quicker to dial in the days of rotary dial phones and, secondly, the use of two different numbers reduced the risk of accidental calls. In the Canaries, the service is operated by the CECOES (Coordinating Centres for Emergencies and Security). It is available 24 hours a day, 365 days a year and offers services in English, Italian, French and German, as well as Spanish. More than 9,300 English langauge calls were dealt with.

Last year over half a million Canarians called 112, of whom 40% required emergency attention. 32,000 of those calls were in Lanzarote and more than 9,000 of all Canarian calls were in English. When you call 112, you’ll be dealt with by an operator who will often pass you on to a more specialised operator who will assess and organise the emergency response required. This could range from the standard police, firefighters or ambulances to specialised mountain or sea rescue units, as well as professionals trained in areas such as domestic abuse.

Most recently, the 112 number has been recommended as the first point of contact for islanders who are worried that they may be suffering from symptoms of coronavirus.

“This drama unites us”
Scroll to top