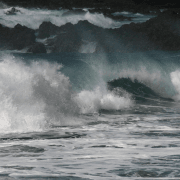 A yellow warning has been announced on the AEMET website, around the coastal areas of Lanzarote until Saturday.

There is a 40-70% probability of the waves being as they predict. Waves could reach up to 4 metres tall in the north of Lanzarote.

Generally, a yellow warning acts as a caution to those areas with low-medium risk; whereas a red warning would indicate high risk.

Although there are no current wind warnings at the time of writing, AEMET have not ruled out the possibility of one being activated over the weekend as they could reach up to 70 km/h.