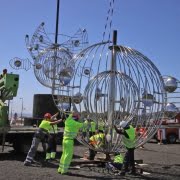 Fobos, one of César Manrique’s most impressive “wind toys” has been returned to its rightful place at the Tahiche roundabout.

The structure of intricate silvery globes overlooks the site where Manrique lost his life in a car accident in 1992, and also featured prominently in Pedro Almodóvar’s film Broken Embraces, with Penelope Cruz’s character dying at the same roundabout.

The sculpture, however, has been absent since 2016, when it was taken down to be renovated. It’s re-installation comes just before the end of Manrique’s immensely eventful centenary year.

Emergency calls from the wild
Homes for Heroes