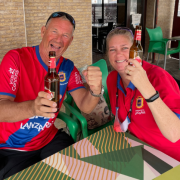 U.D. Lanzarote’s form continues to improve as they move up to fourth spot in the Tercera Division (fourth tier) and remain unbeaten in their last five matches, winning three of those and all without conceding a goal. Ian Lane reports. 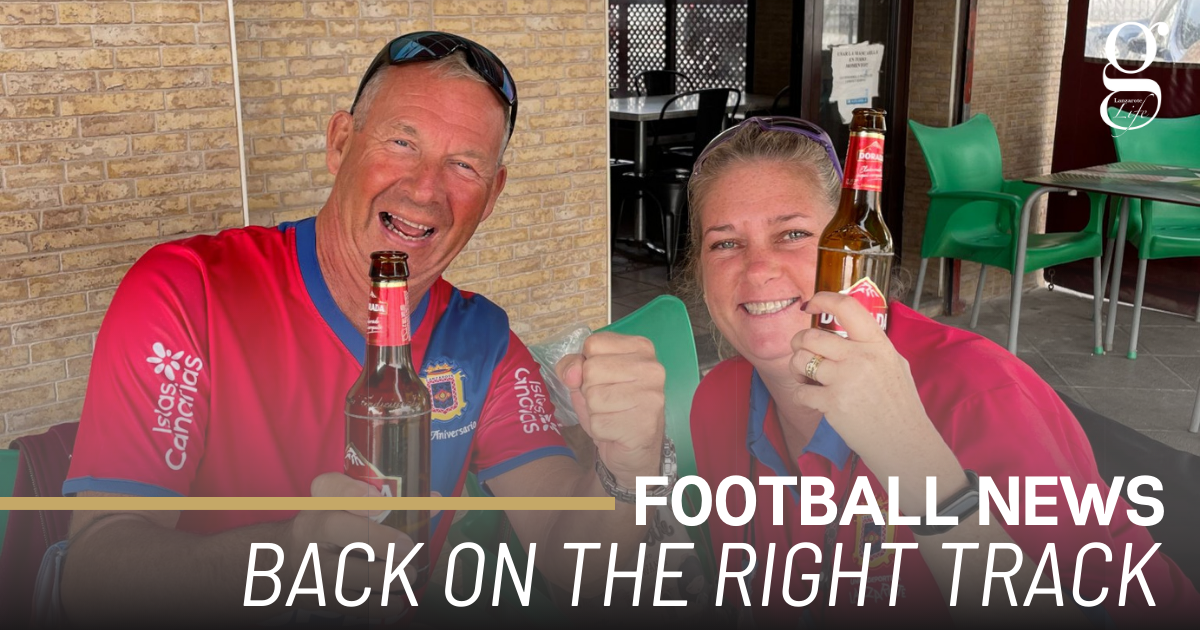 Photo: Leigh and Dave enjoying a celebratory drink after the match.

First published on February 1st 2022, in the Gazette Life magazine.

The Rojillos (The Reds) played their last match of 2021 on the 12th of December in a goalless away draw but didn’t return to a pitch until the 16th January. This extended Christmas break was due to a free game and a suspended match due to Covid.

After more than a month without competitive matches, Lanzarote faced the league leaders UD Las Palmas C at home in Arrecife. The Gran Canarian side dominated possession in the opening 40 minutes but the Rojillos’ defence keeps on improving and didn’t allow the visitors a single strike on goal. As the half came to a close it was Lanzarote, with new signing Ismael Traor, that came closest to opening the score with two strikes just past the right hand post.

Lanzarote threw everything at Las Palmas in the second period but in the 86th minute the visitors were awarded a penalty and it seemed all their efforts were going to result in a defeat. The spot kick struck the woodwork and that miss was the catalyst for the crowd roaring Lanzarote on for that final push for victory.

Deep into stoppage time, the super Brazilian Alyson received the ball short  from a corner on the right. With a clever touch and a swivel of the hips the 19-year-old made room for a strike and whipped the ball low into the far corner to claim the win and send Lanzarote back into the playoff positions.

The much-awaited live concert organised by David Timmons and Brendan Byrne featuring Il Divo tribute band “3 Operas” on the 19th December proved an enormous success. The Irish boys sold all the allocated tickets and a marvellous time was had by all.

During the concert the draw for the Christmas raffle with five one-week luxury holidays in Lanzarote up for grabs took place. Combined, both events raised a little over €6000 for the club and the great news is that another concert is planned for April, details will follow.

(normally it is Sunday at 12 noon but please check)

Go to Lanzarote Football Club (Facebook page) or www.mercancialanzarote.com for info, season ticket & membership details etc. All shirts and other merchandise can be bought at the Teguise market stall on Sundays; online at www.mercancialanzarote.com/shop/ or at the shop in Costa Teguise which is based at Centro Comercial Nautical, local 25 (up from Decades bar and behind Café Bonjour). The shop is open Mon to Fri 10am to 1pm.

“Dad, it just does!”
Scroll to top