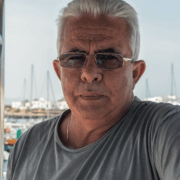 The Líneas Marítimas Romero ferry plies between the northern village of Órzola and La Graciosa’s capital eight times a day in the winter, with extra trips in the summer months. The 25-minute voyage is usually divided into two sections – a dash to the north-east tip of Lanzarote in waters that are often choppy and rough before the ferry rounds the Punta Fariones into the calmer Río, where passengers are treated to spectacular views of the brooding cliffs of Famara.

On the day we step on board, our captain is Pepe Toledo who’s more than happy to allow us into his cabin for photos. And when we alight at Caleta de Sebo, we have a date with another of the skippers who’ve sailed this route for decades: Luis Romero – who is also the grandson of the man who established the ferry company in the 1970s.

Don Luis, how many times do you think you’ve done this trip?

Oh, many thousands. I still enjoy it, though. I’m 57, I feel young and have a long way to go before I retire.

And you’re a Graciosero born and bred?

I was born in Arrecife, but my family’s from here, and I’ve lived here all my life.

What was it like here before tourism changed the island?

In the 1960s it was hard. There was no electricity and no water. An army boat used to deliver water and everyone would carry it home in containers. In 1975 there were some generators and a desalination machine, and finally in the mid-90s we were connected to the mainland for power and water.

When did you start sailing?

It was all I ever wanted. When I was a small child the first dream I had was of having a toy boat, and a little tin boat made of an oil container was my first ever toy. Later, my first wage was when I went fishing.

The Gracioseros aren’t fishermen originally. They bred livestock and would bring their goats and animals over here when the grazing was poor on Lanzarote. They settled permanently in 1885, and took up fishing afterwards, but there were also many animals.

When did the ferry start?

My grandfather started it in 1970, and it would go once a day, mainly to pick up the post and supplies. Boats went before that, of course, but they sailed to Órzola, to Famara or just to the foot of the cliffs, where girls would climb up to exchange fish for potatoes and other groceries at

Haría market. You could also get fairly fresh water at the foot of the cliffs, which had filtered down from above.

When did you first captain the ferry?

How many of you are there?

Five and a couple more who can step in if needed. We have three boats and a large yacht that takes excursions around the island.

Are there ever any serious problems on the seas?

We have breakdowns every now and then, but that usually means we can’t sail. But boats can be fixed and replaced; people can’t, so we always place the utmost importance on passengers’ safety, and if the weather is too rough, we won’t go.

But you still get a few cases of seasickness?

Yes, the stretch from Órzola to the point is pure, open Atlantic Ocean and is often rough. Then there’s the fact that the water is shallow at Órzola harbour, which causes big, breaking waves. But it’s not a long journey and most days are fine.

Do you think tourism is spoiling the island, as others have claimed?

It’s what we live off. It’s true that it can get very crowded here in July and August, but the main complaints happened two years ago, when holiday makers were coming here instead of Egypt, Tunisia and Turkey. There was also a strike at the tourist centres on Lanzarote so everyone came here. It’s been much more manageable recently.

Does the company have any plans for the future?

We’ll be celebrating our 50th birthday shortly, and I’d like to do it with a typical old- style boat. As far as routes are concerned, we go from Playa Blanca to Corralejo and Puerto del Carmen, but we ́d like to add more routes in the future. We need to change one of the boats for a newer one, too. The yacht for excursions was bought in La Rochelle in France two years ago, and it ́s a lovely craft.

Thanks to Luis and Lindis at Líneas Marítimas Romero for their assistance, and thanks also to Cafeteria Elveril on the beach at Caleta de Sebo for a fine meal, and for returning a lost mobile phone.

The woven, bucket-shaped sombrero of La Graciosa is the defining icon of the island, worn by both men and women and an effective protection against the sun.

But they’re not cheap or easy to find. The renowned Doña Enriqueta, who is pictured modelling her sombrero, tells us the sombreros take many days to weave from carefully selected palm fronds, and will cost around €200. At the El Bucio Canarian artisans shop in Arrecife, a lovely example was recently on offer for €130.

Haría market on a Saturday morning is a good place to look for the hats, too, although the sad death of 90 year-old Esther Romero last April has taken away one of the island’s most celebrated craftswomen.

The bright side of life

The world is your office

From Tiffin to Thalis

The Social Network
It’s the bomb!