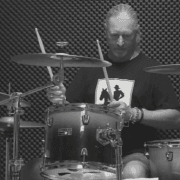 Martin Schofield is generally tucked away behind the drums in the Band of Gypsies Lanzarote. Julie Helliwell met up with him to hear more about his musical career.

How did it all start?

I was in the brass band at secondary school. I wanted to be the drummer, but they wouldn’t let me, so I played Eb bass. Just before I did my exams, my father bought me a drum kit, so I missed most of them because I was busy learning to play. My father and I loved to watch Jazz programmes like ‘Big Bands at the Dorchester’ and I idolised drummers like Sonny Payne and Buddy Rich. I taught myself by watching drummers playing all styles of music. My advice is to listen to every genre of music and to pick up what you can from it. The more I listened, the more I got involved in the beat. The drums are the heart of the music and are what get your feet tapping.

How long have you been a full-time musician?

I’ve played for 45 years and been full time for 30. I’ve worked with and met some wonderful musicians on various tours in the UK and Europe, including John Walker from The Walker Brothers, Uli John Roth from The Scorpions and Chris Slade from AC/DC – he played with his band at my venue in the UK. I had a Jack Daniels with John Entwistle from The Who – some great times! I’ve been really privileged to play in amazing places that I’ll never forget, and whether it’s a big or small gig, you just put on the best show you can, and if the audience like it, that suits me.

What type of venue did you have in the UK?

It was a music venue that I had for 5 or 6 years. We used to have bands on 5 nights a week – tribute bands, named artists and up-and-coming bands. Times changed a lot in Manchester – more venues opened up, and it just wasn’t working any more.

What brought you to Lanzarote?

We started renting a place here in 2015. We came over so often that Verity suggested we rent somewhere. We’ve been together for 18 years so she was a rock widow for a long time – she’s always been really supportive of me. We spent three years going backwards and forwards but have lived here properly for the last two. We have a lot more time together now.

Tell me about the bands you play in.

The first band I was in here was ‘A Band of Gypsies’ which started in England and was with two lads who moved over with me. We played heavy rock music around Costa Teguise and Puerto del Carmen, but after a while, they both moved back. Having spent time establishing the brand in Lanzarote, I kept the name, but changed it to ‘Band of Gypsies Lanzarote’. I’m now playing with Pete Tilbury-Fowler and Fran Ojeda. We’re the resident band in Decades in Costa Teguise and we play on Wednesdays, Thursdays, Saturdays and Sundays from 9.30pm.

On Saturday nights we do Rockioke, which means people have a chance to sing with us. We have a list they can choose from and we have some really good singers getting up.

I also play in a duo called Smokin’ Barrels – Adrian Bambrough and I do that on Friday afternoons in Abbey Road from 3-5pm. It’s a really fun afternoon where people can have a few drinks and sing along to some great tunes.

What does the future hold?

I’m in another band with Gerie B and Fran Ojeda called The Sound Collective. I really want that to get off the ground this year. I’ve always wanted to play in a bigger band and in March we’re hoping to start a monthly show that will be in Decades at the end of every month. We’ll hopefully be performing in hotels in the future too.

With the Band of Gypsies Lanzarote, we’re going to be recording a cd over the next couple of months, and we’re resident band at Decades for the next twelve months, so it’s taking care of itself nicely.

To see where Martin is performing, check out the Live Music Guide or Facebook: @Bateria Mart or @bandofgypsieslanzarote.

Eye in the sky
Recipe Of The Month