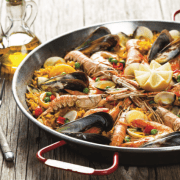 Twelve members of a driving school who were celebrating the end of an intensive course with a paella in an Arrecife bar ended up showing symptoms of cannabis consumption last month.

Of the twelve, eight were treated at Arrecife’s hospital and three have lodged an official complaint with the police. Zaharia Mohamed Dris, director of the driving school, told La Provincia “I ate three platefuls of the paella because it was delicious, but when I left the bar I fainted.”

At first, it was suspected that one of the course members was playing a prank on the others, but this has been strongly denied. Police closed off the kitchen of the bar while investigating and briefly arrested the cook.

Make friends and discover Lanzarote on a bike!
A Government at last

Drumming Up Trade
Scroll to top