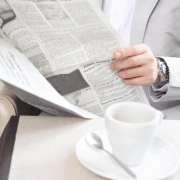 Spain has a strong journalistic tradition, and the Canaries is no exception. The recent improvement in online translation means it’s easy to access the local papers. Here’s a brief guide!

The local Canarian newspapers you’ll see in Lanzarote newsagents are Canarias 7 and La Provincia, both of which cover the eastern province of Las Palmas. Both are also online, although La Provincia’s site operates a paywall. However, both are well-produced, serious papers that produce a wealth of information on a daily basis.

Tenerife’s province of Santa Cruz also has its papers, but they’re rarely spotted on Lanzarote.

Of the national newspapers, the bestseller is El País, which emerged as Spain’s progressive voice following Franco’s death. However, it’s more recent move to a centrist position has allowed more left -wing voices, such as El Diario (online only), to establish a readership.

On the right, ABC is a traditional right-wing paper, and was the most popular daily during the Franco years. El Mundo follows a more individualist right-wing agenda.

There is much more to discover, from satirical magazines to serious economic publications. Spain’s press may have changed a lot, but it still remains in a healthy state.