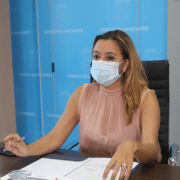 Cabildo president María Dolores Corujo has welcomed the decision of the Spanish government to authorise PCR tests on all tourists to the Canaries on their arrival and before they leave.

At a meeting with Lanzarote tourist professionals yesterday, Corujo said “While it’s still too early to know the exact date on which this measure will commence and its cost, the Minister of Tourism, Reyes Maroto, has informed us that the protocol will be prepared next week, ready to be presented to the European Commission on 28th September with a proposal from all tourist ministries.”

Maroto’s announcement on Thursday marks a change from Spain’s previous stance, which was that testing on tourists would be logistically impossible, and is a major achievement for a Canarian government which has been loudly demanding the power to carry out tests for several months. It also means that the Canaries will not need to operate their “Plan B”, which was to cut out the need for state approval by agreeing a compulsory testing protocol with tour operators.

Corujo recognised the high level of infections on the island, and said “At the moment all our efforts should be completely focused on the main objective: stopping and reversing the current curve of contagions on the island. The health of everyone, tourists and residents, is the main concern and priority of this governing group.”

Ángel Vásquez, Lanzarote’s Councillor for the Promotion of Tourism, said “the possibility of opening travel corridors between Lanzarote and our main markets, Britain and Ireland, is wonderful news and allows us to bring a number of tourists that may be lower, but could avoid the economic sinking of the island.”

Vásquez also informed the meeting that Jet2, one of the main operators from the UK, had transmitted their “trust and maximum interest in being able to recommence operations on the 26th September.”

Emergency calls from the wild
Back to school next Wednesday