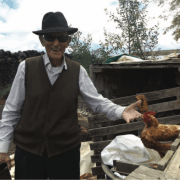 The Juan Brito Foundation, formed by family and friends of the multi- talented Juan Brito, who died two years ago at the age of 98, organised a moving celebration of his centenary year at San Bartolomé’s theatre last month.

On stage was the upright armchair in which Don Juan received visitors at his apartment in Arrecife, and Juan’s son Victor read out diary entries that his father may have penned on his hundredth birthday.

A joyful performance of folk songs by the Parranda de Amigos de Florian Corujo included one of Juan’s lyrics, and the event was concluded with a performance of latin-inspired pieces by Bohemia Lanzarote.

The Year Ahead
Scroll to top