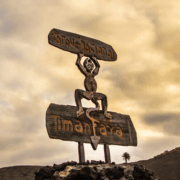 César Manrique’s devil sculptures greet hundreds of thousands of visitors to Timanfaya each year, but is there a tragic story behind the prancing demon with the pitchfork? 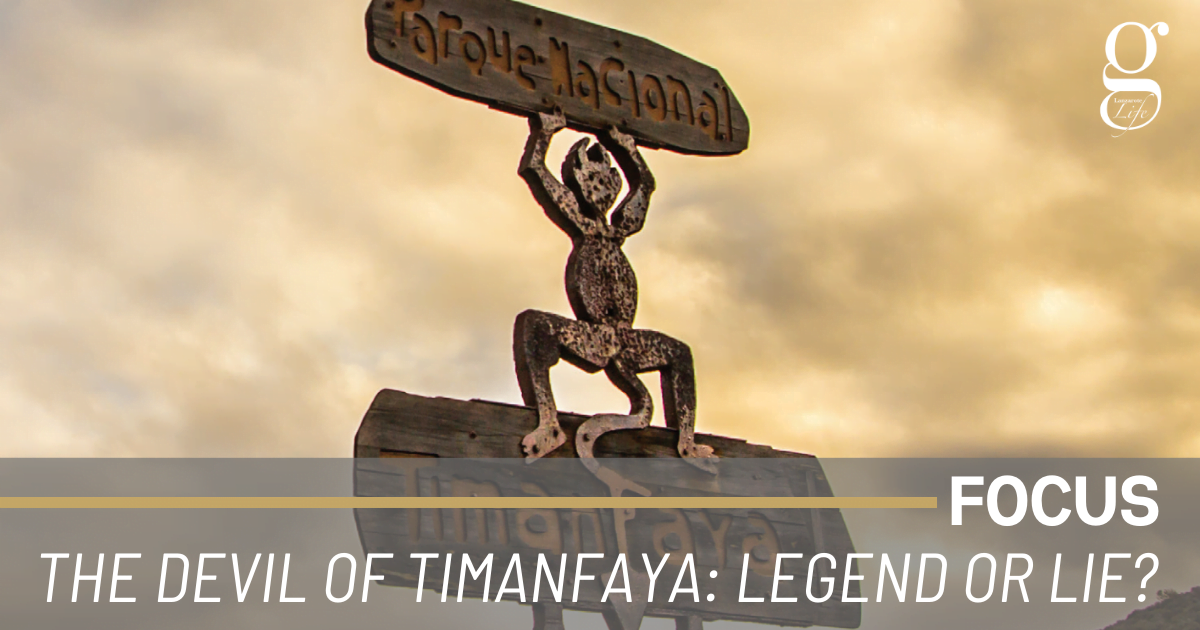 Many islanders have heard the “Legend of the Devil of Timanfaya”, and many visitors have been entertained by tour guides telling the story, which goes a little like this:

“On the night of the 1st September, 1730, a wedding was held in Yaiza, where guests gathered to celebrate the union of the son of a rich family and the daughter of a local farmer of curative plants.

In the middle of the celebrations, a huge explosion was heard and stones and boulders began to rain down. The terrified guests ran to find refuge, but misfortune fell upon the bride and groom.

A huge boulder fell from the sky, crushing the bride. The desperate groom found a five-pronged fork to move the boulder off her body, but when he did so he discovered she was dead.

Desolate, he ran off into the valley holding the body and the fork, looking for shelter that he could not find.

The last thing the locals saw of him was figure standing on a hilltop, in front of a full moon and surrounded by ash and smoke holding the fork above his head before disappearing. “Poor devil;” they whispered.”

The story has its charm, but unfortunately it is likely to have been invented within the last 40 years. Firstly, there are no records of anyone being killed by the Timanfaya eruptions, whose most famous witness, Andrés Curbelo, was the parish priest of Yaiza and might have been expected to know about a tragic death at a wedding.

More to the point, the devil with the five[1]pronged fork is an invention of César Manrique, who never mentioned any such legend. The sculptures that guard the national park are based on a sketch made by the artist in 1968, in which the devil holds a fork above its head, but Manrique’s devil is more likely to be a humorous reference to the hellish landscape and heat of Timanfaya than a reference to a legend.

A version of the legend that has been widely circulated on Youtube was made by a company selling aloe vera products, and claims that curative plants grew in the volcanic ash after the eruptions. These plants were named after the groom, Aloe, and the bride, Vera.

Again, this is fake news. The Aloe vera plant was named by a Dutch botanist in 1768, and is latin for “true aloe”. Aloe is not a Canarian boy’s name, and the name Vera has never been popular in Spain or the Canaries.

“The Devil of Timanfaya” seems more likely to be a fairly recent children’s story or tale, and has in fact been the subject of children’s books in the Canaries.

Legends are stories, of course, and many of the other legends of the Canaries, such as the suicide of the doomed Guanche lovers Gara and Jonay on La Gomera, have also been shown to be far more recent than they would seem.

But other legends, such as the story of San Borondón, a mystery island that appears to sailors from behind banks of fog and then disappears again, are much more ancient. The enchanted island is based on the writings of 6th century Irish monk Saint Brendan, and has been present on the Canaries for over 500 years.

Another Lanzarote legend, the tale of Princess Ico being closed up in a smoky cave in order to prove her nobility, was originally mentioned by the French writer Abreu de Galindo in the 17th century and has been retold many times by folklorists such as Juan Brito.

Most of these legends have their roots in some event or ancient tale that has been handed down over generations, but the “Devil of Timanfaya”, while based on the eruptions of 1730, seems to have been invented far more recently.

Making it clear
Scroll to top