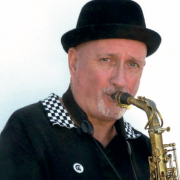 Anthony Cummins is one of the most well-known saxophone players on the island, especially in the Ska scene. Julie Helliwell chatted to him, taking One Step Beyond to understand more about his musical journey.

How long have you been playing the saxophone?

31 years. My ex-wife’s brother was in a folk band and they asked me to go along as a singer. I was inspired so went to a music shop and couldn’t resist buying the sax in the window.

What brought you to Lanzarote?

When I bought the sax, it was my dream to move to Spain and play for a living. I was driving my children and fiancée Karen crazy and I practised with that goal in mind. In 2012, I sold up and we moved to Gran Canaria. We arrived on Saturday and within the first week we had a long-term apartment, mobile phones, business cards and my first gig!

We had to return to the UK for 15 months due to a family bereavement, but I needed to continue with my dream. A friend suggested Lanzarote so I came on holiday a couple of times and we decided to move here. After two days I got a gig at The Venue in Costa Teguise and built it up from there.

How did you get into singing?

I had numerous sax gigs and people always asked if I sang. One night I did ‘Let There be Love’ by Nat King Cole and I spontaneously picked up the mic and started singing. Everyone clapped! We developed the set from there, and the more I sang, the more gigs I got. I wanted to sing songs that were an off-shoot of jazz, so I chose the Rat Pack, Frank Sinatra, Dean Martin etc, which I still do now in my solo shows.

What’s your favourite music to play?

At the moment, it’s Ska. I still love playing jazz, but it’s a tremendous task to become a great jazz player and I think I started too late. I was already playing Ska music when I met The Skatoons. They wanted a sax player and I joined them in June 2017. At the beginning it was difficult because I was working on Friday nights, but they would save the big sax songs for when I arrived. It’s still a highlight of the month for me because I can just blast it out whilst the lunatics do all the performing!

Playing with them gave me a taste of the music I’d like to play, which is why I suggested to you (Julie) that we form The Ska Duo. It’s exceeding my expectations a lot. I didn’t realise we’d click so quickly and that it’d take off so fast. Jazz and the other music has taken a back seat because of the demand for The Ska Duo. From the very first gig, we just got on with it. We put on a great show which we really enjoy and the audiences love. We’ve just recorded a CD that will be available at our shows or on Facebook.

What are your hopes for the future?

I don’t really have any plans. I’ve bought a place here which has eased the pressure of renting. I don’t think I’ll stay in the long- term, but probably for a couple of years – it depends on my family. I hope that The Ska Duo becomes more successful and well-known and that I continue with my own music.

I played a wedding at Jameos del Agua and it was an amazing acoustic. I was on a platform and they shone a light on me. I’ve done quite a few weddings now, including a few in Fuerteventura.

Start young, but it’s also never too late. I’m a prime example of that. I didn’t have a musical note in my body when I started playing the sax aged 28. You need determination, a dream and to practice, practice, practice!

I’m living my dream through hard work. I want to say thank you to Karen who’s stood by me from day one and I’m having a great time doing what I’m doing. I love it. I’m really blessed to do this for a job and I’m humbled by all the lovely comments I get.