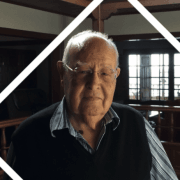 At 84 years old, Antonio Lorenzo Martin is uniquely qualified to speak about the importance of Canarian politics and culture. In 1979 he was the first elected President of Lanzarote’s Cabildo following Spain’s return to democracy after 40 years of dictatorship, and later he was appointed the Officali Chronicler of Arrecife.

Don Antonio has published two books of vivid, humorous recollections of bygone Arrecife, and his weekly broadcast on the Cadena Ser radio station is eagerly followed by many islanders. A keen amateur painter as well, he now lives in active and contented retirement at his home overlooking La Concha beach near Arrecife, where Shaun Addison met him recently to hear his reflections on Canarian culture, and the immense changes that have taken place on Lanzarote during his lifetime.

Don Antonio, could you tell us a little about your background?

I was born in Arrecife in 1932 and grew up there and in San Bartolome, where my mother, my grandmother and my great grandmother were school teachers. I studied law at the University of La Laguna in Tenerife before returning to the island, where I helped set up the Land Registry and worked there for 42 years.

What made you stand for President in 1979?

When the elections arrived they were something new. Under Franco’s dictatorship, politicians were designated by the government. At the time there were still older people who remembered the last time they had voted, before the Civil War in 1936; and there were also people who were against democracy – some people always prefer the past.

But generally there was huge enthusiasm. Democracy was something new, and when something new happens everyone wants to be a part of it.

What do you think about the politics of today?

It seems there’s a lot of arguments and insults. In my day, we were first and foremost friends. We all knew each other and we reached a consensus that wasn’t necessarily dictated by ideology. But things have changed a lot – when I was President there were just 15,000 people in Arrecife. Now there are almost four times that amount.

What are the main changes you’ve seen on Lanzarote in your lifetime?

Oh, there have been so many changes. The port and the airport have changed completely. I remember the days when there were no aeroplanes landing here, then just one a week. Now there are dozens a day.

Of course, it’s tourism that has been the main reason for these changes. This island used to be poor, and historically depended on the cultivation of one single crop – first it was barilla, used for soap-making, then cochineal, but both these industries died. Tourism has proved to be a more successful and varied source of wealth.

But most of all, I think the level of culture has improved immensely on the island. 60 years ago there were maybe 1 people on the island with a university education – now there are hundred of them, from all over.

What do you think are the defining elements of Canarian culture?

For me it’s simple the fact that we are islands. That has meant that we were isolated for many years, but it also means that we lie between three continents. Nowadays, the predominant culture is European and north American, but there was a time when 75% of islanders were of African origin. Then there are the links with latin America – in the past there are few families who don’t have some member who went to make their fortune in Venezuela, Cuba or America.

The fact that we are islanders also makes us self-reliant. If you life on the mainland, you can travel to see museums, sporting events etc. Here you cannot, so we’ve had to create those things ourselves. We have a little bit of everything.

Do you enjoy the carivals?

I don’t like them much, in fact. I think carnivals appeal to young people, and you must remember that they were banned when I was young. Latern when they were reintroduced, they didn’t really appeal to me much.

Did you know Cesar Manrique?

Of course, In Arrecife he was responsible for establishing El Almacen, the island’s first art centre. The major works of Manrique are found all over the island, but I still think his best work is in Arrecife.

The murals he painted for the old Parador Nacional. This was the island’s first hotel, opened by general Franco in 1950, and you can still see the murals that Cesar painted later in the building on the seafront, which now belongs to the UNED.

His mural titled El Viento (The Wind) is, I think, one of the most moving evocations of Lanzarote, with the peasant woman and the tree bent double against the wind.

You do some painting yourself, don’t you?

Yes. It’s a hobby I enjoy a lot. One of the paintings I completely recently shows two English corsairs attacking the Castillo de San Gabriel in 1762, when they tried to raid the boats lying in Puerto Naos. A hundred troops put ashore and the people were forced to flee inland with their belongings.