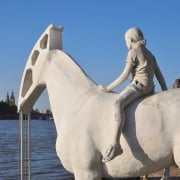 The “Four horsemen of the apocalypse” can be seen at Arrecife this month as the Castillo de San José hosts Jason de Caires Taylor’s artwork The Rising Tide.

The artwork consists of four life-sized Shire horses, constructed out of the pH neutral concrete that Taylor has also used for his incredible Atlantic Museum Project, which opened earlier this year at Playa Las Coloradas in Playa Blanca.

Each horse bears a single rider, and each of the animal’s heads has been replaced by a model of the curved metal boxes that are found in oil pumping units. In the oil trade, these are known as “horses heads” or “nodding donkeys”.

The work is a comment on climate change, with the horses representing the older sources of power which have been replaced by fossil fuels. Two of the “riders” wear suits and seem to be ignoring their immediate situation, while two others are teenagers, representing the future.

The artwork was originally commissioned for the Totally Thames festival in London last year, and was situated less than a mile from the Houses of Parliament. Just like in

London, the horses have been placed in an area at the foot of the Castillo de San José where they will be covered by the rising tide twice a day, only being revealed as the water recedes.

Taylor’s Atlantic Museum Project produced international attention for Lanzarote, and the Cabildo’s decision to host this artwork is aimed at broadening the artists reputation even further and strengthening his links with Lanzarote.

The sculpture’s message is also welcome on an island which saw massive protests against proposed oil prospections a couple of years ago. Although no viable oil supplies were found, the subject of global warming remains of huge importance on an island surrounded by water. A recent IUCN report claimed that rising ocean temperatures were “the greatest single challenge of our generation,” and predicted that sea temperatures could rise by up to four degrees by the end of the century.

If you’d like to see the sculptures, they are located in the sea at the foot of the Castillo de San José, overlooking Arrecife’s Puerto Naos fishing port. However, check the Gazette’s tide tables at the back of the magazine before you go – the sculptures will be best seen at low tide!

June 2016: Attack of the Lizard People
Scroll to top