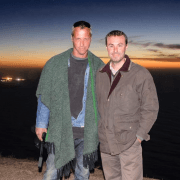 After years of observing asteroid activity from his observatory in Nazaret, Lanzarote. Astronomer Gustavo Muler has been honoured by having an asteroid named after him.

200 million kilometres from Eath lies the asteroid belt, an area between Mars and venus that is home to hundreds of thousands of asteroids and mini-planets, all orbiting the Sun. The precise number of these bodies is as yet unknown, but astonomers are working to identify new asteroids all the time.

Lanzarote-based stargazer Gustavo Muler has discovered several asteroids before, and even named two of them after his children. But the Argentinian-born astronomer, who makes all his discoveries from a telescope located in the roof of his home in Nazaret, found himself honoured when another of his discoveries was named after him by the Minor Planet Centre in the USA.

Discovering an asteroid isn’t just a matter of spotting one. The asteroid, which usually measures between two or three kilometres in diameter, must be tracked in four separate positions, allowing observers to trace its orbit. The larger the distance between these four sightings, the easier it is to esablish the orbit of the asteroid.

Gustavo is an amateur astronomer, who works as a carpenter during the day. But once night falls he’s watching the stars and making calculations.

It’s not the first time Gustavo has hit the headlines, either. In 2007 he was the second astronomer in the world to report the explosion of the 17P Holmes comet, which created a cloud of gas and debris that was briefly, the largest object in the solar system.

The following year, he was one of the first astronomers to predict the trajectory of the 2008TC3 asteroid, which entered the Earth’s atmosphere on October 7th, 2008, exploding 37 kilometres above the Nubian Desert in Sudan, and scattering over 600 meteorites in the area.

Gustavo, along with fellow astronomer Cesar Piret, is also one of the members of Astronomia Lanzarote, an organisation which regularly holds free astronomy evenings open to the public.

Arrecife’s Councillor for Culture, Rafael Juan Gonzalez congratulated Gustavo publicly on his honour, and urged all Lanzarote locals to take advantage of the Astronomia Lanzarote evenings.

Gerie B
Scroll to top