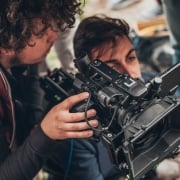 Lanzarote became the scene of a invasion of ferocious sea lizards last month, as filming for the new horror film Cold Skin took place on the Tinajo coast.

Cold Skin stars the British actors David Oakes, who has previously appeared in TV series such as The Living and the Dead and Victoria; and Ray Stevenson, a veteran actor most recently known for his roles in the Divergent series. Spanish actress Aura Garrido completes the small cast for a film which is being directed by the Frenchman Xavier Gens, best-known for his 2007 film based on the Hitman video game.

Lanzarote’s wild and hostile north coast provided the perfect backdrop for a film set on a remote Atlantic island, but the film makers also had to construct a full-scale lighthouse on the shore near Playa de las Malvas in Tinajo. The lighthouse plays a key role in the film, providing the last bastion for the two main protagonists as they try to survive a fantastic and terrifying mass assault.

Casting for the film took place in March, when the film’s producers posted requests on social media for “athletic men aged between 16 and 45” to play extras. Hundreds turned up to the casting sessions in Arrecife, but if they though they might get a chance to be noticed for their good looks,, they were in for a let-down. The extras were heavily made up and played the invading hordes of “half- lizard, half-leopard creatures” that attack the heroes of the film.

The completed film is due to be released next year.

Albert Sánchez Piñol published La Pell Freda in the Catalan language in 2002. The novel became an immediate sensation and has now been translated into several languages.

A strange, thoughtful and terrifying book, Cold Skin tells the tale of an Irishman who takes a job as a weather observer on an isolated south Atlantic island. On arrival, he discovers the previous weather observer has disappeared and the only other inhabitant of the island, the lighthouse keeper, locks himself away and refuses to communicate.

On his first night on the island, the novel takes a horrifying twist as the observer finds himself under attack by strange, lizard-like creatures which crawl out of the sea. After surviving the onslaught, the two men finally join forces, but the observer later discovers that the lighthouse keeper is keeping a female lizard as a slave.

A bizarre love story then develops, raising unsettling questions of insanity, sexuality and identity. Cold Skin is a novel that stays in the mind for years: it makes you think, but it also provides a rip-roaring tale of adventure in an old- fashioned style that brings to mind the works of H.G. Wells or H.P. Lovecraft.