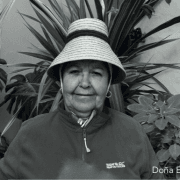 The unspoilt, traditional life of the Canaries is ever-present on La Graciosa. Shaun Addison jumped onto the Órzola ferry to meet some of the older islanders, and hear their reminiscences of the tough, yet rewarding lives they lived.

La Graciosa lies a mile and a half north of Lanzarote, but once you’re there, the distance seems much greater. This is an island that still seems preserved in the past, and on the sandy streets of its capital, Caleta de Sebo, you can still find people who’ve lived their whole lives there, looking out at the endlessly flowing Río – the ribbon of sea that separates the isle from the forbidding cliffs of Famara.

I’ve come to the island to find out more about the Gracioseros, and as the tourists on the ferry disperse on foot and on bicycles to the isolated and beautiful beaches and volcanoes dotted around the island, daily life continues as normal. Fishermen are unloading their catch at the harbour, ther cries of children playing can be heard from the school and a woman wearing the distinctive bucket-shaped straw hat of the islanders is returning from the little Post Office with a parcel.

Enriqueta Romero Betancort is the first person I’ve come to see, but she’s mopping her porch when I arrive, so she tells me to pop round the corner to speak to Doña Margarona and come back when she’s finished her chores.

Margarita Páez, known fondly by everyone as Margarona, is a legend on the island– a tough 70-year old who is known as the unofficial mayor of the island and the “spirit of la Graciosa”. In her life she’s worked as a goatherd, an undertaker, a midwife and, for 22 years, as a politician, representing the island on Lanzarote at Teguise council. The modern facilities that line the sandy streets of La Graciosa – a school, a health centre, a council office – all owe their presence to her tenacity.

She’s shaken hands with several Spanish Prime Ministers in her lifetime, but on my visit she’s busy painting her living room, so can’t speak for long. I congratulate her on the fact that a street nearby has been named after her, and mention that I know Juan Brito, the Lanzarote folklorist who’s been given the same honour in Arrecife. Margarona knows Juan well, and tells me that she’s pleased that her island is now increasingly popular with tourists. “This is what brings the things we need.”

I return to Doña Enriqueta, who greets me in a living room lined with photos of family members. One photo shows the stone mill that her family used to grind the maize for gofio after they had toasted it, and as we talk she’s interrupted by phone calls asking about the Christmas trucha pastries she’s preparing for a friend.

Christmas on La Graciosa is a charming affair – a drago tree overlooking the sea front is decked with children’s hand-made ornaments, and the Three Kings always visit the island on a boat. Enriqueta is planning to follow tradition by eating kid – the killing of a young goat was always reserved for festive occasions on the island.

“My father was a hard man,” she recalls, “But this meant that I learned how to look after myself. I was sent to work at the age of seven, looking after the goats. Later, when my father got rid of them, I cried.” She became a camel herd instead, picking up the few tourists who arrived and taking them to the beaches and volcanoes on the island.

Enriqueta’s restaurant is one of the oldest and best- known on La Graciosa, but she never planned to be a cook. “I never knew my mother, so when I married at the age of 22 I didn’t know much about cooking. I’d try and make meals for my husband, and if they worked out well I’d do it again,” she smiles. Later she realised that many of the visitors to the island were looking for something to eat. At first she simply invited some of them to join her family, but later a business slowly grew up. Nowadays, Enriqueta says she loves cooking, loves being in the kitchen, and is famous for her paella – “I put a lot of seafood in it,” she says.

Up the cliff barefoot

A couple of streets away, Enriqueta’s sister Carmen lives with her husband, Antonio Hernández Martín. Carmen’s knee problem has confined her to her home, but her memory is every bit as sharp as her sister’s.

She tells me how, in their teenage years, Carmen and Enriqueta both carried out one of the most famous tasks of La Graciosa’s women. The young women would buy fish from local fishermen, then salt them at home and dry them for a couple of days in the sun. When the lightly-cured fish were ready for market, they would wake at 4am and the menfolk would ferry them across El Río to the Playa del Risco, carrying the girls onto the beach on their shoulders so their clothes didn’t get wet.

Each of the Graciosera girls would then carry two 30 kilogram sacks up the steepest and highest ascent on the island, climbing the winding rocky footpath up the cliff to the Mirador de Ye. They would do this twice, carrying one sack and leaving it half way up before going down to the fetch the other, then repeating the process until they reached the top.

Most amazingly, they did this gruelling route barefoot. Carmen says “We took our shoes with us, but we wanted to look nice when we arrived in Haría, so we would only put them just before we arrived at town.”

For many years, the islanders also carried their dead to Haría this way, as the nearest cemetery was there. Antonio remembers helping to carry a coffin up the cliff and says “That was tough work.”

Antonio and Carmen lived in Arrecife for many years, where she opened a clothes shop while her husband was away at sea for weeks at a time fishing for tuna off the African coast. Now retired, Antonio still takes his boat out fishing, this time for the coastal species that have formed the diet of the islanders for centuries

Both Enriqueta and Carmen agree that life was better in the old days. “We used to share things all the time,” says Enriqueta, “If I didn’t have salt, someone would give me some, and I’d give them milk if they were short. We lived together and we worked together.

Carmen says “There’s more money now, and life is much easier with supermarkets and a health centre, but money also brings envy and jealousy, and that’s something I don ́t like.”