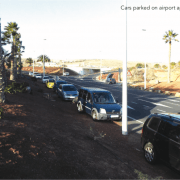 Every day, the approach roads to Arrecife airport are filled with parked cars, highlighting a problem that does not seem likely to go away any time soon.

The vast majority of these cars belong to airport workers, who are forced to pay a minimum of €22 a month to park at the airport. Many more workers who are ineligible for the discount scheme operated by the airport authority have to pay the full amount for parking in the airport’s car parks.

Airport authority Aena has tried to stop workers parking cars for free by placing boulders along the roadsides of the airport’s inner roads and restricting access to the roads leading to the military aerodrome, but this has only resulted in more cars being left in other areas that are not controlled by the airport. Some owners have even parked their cars on the verges of the main LZ2 road.

In 2016, the Socialists of San Bartolomé criticised Aena’s decision to erect barriers to prevent free parking, claiming that the airport had not obtained the requisite permission from the Ayuntamiento to do so. San Bartolomé is also engaged in a long-running lawsuit to reclaim an estimated €700,000 from the airport, which it claims is a result of operating the car parks without business or municipal licences.

The Cabildo, which is responsible for main roads, has decided to take no action against the parked cars because a cycle path is planned to be built along these verges shortly, which is likely to reduce the spaces further.

The planned cycle path also raises another peculiarity of the airport. Even though many of the workers live within walking or cycling distance of the airport, and the footpath along Guacimeta beach and the airport is hugely popular with walkers and cyclists, there is a still no practical way to access the airport safely by foot or on a bike.

The problem is made more acute by the fact that many of the jobs at the airport are in poorly paid jobs, meaning that even the €22 parking fee for workers is a considerable expense for some many of them. Parking your car on a verge is seen as preferable to paying for the privilege of going to work.

Meanwhile, the public transport links to the airport remain limited and relatively expensive. A worker who needs to take buses to and from work at the airport would end up paying around €45 a month for a travel card from Arrecife, Playa Honda or Puerto del Carmen.