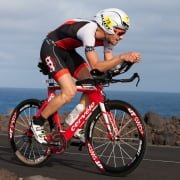 “When I was a child I used to go to the beach in the summertime, I rode my bicycle and had a wonderful time playing around. Older boys would teach me how to swim and we had lots of fun holding races on the beach.”

Kenneth Gasque, Ironman Lanzarote founder and race director, is the man responsible for changing the face of Lanzarote’s tourism. As the island’s biggest race celebrates a quarter- century, he reflects on the early days and how the spirit of playing on the beach turned into one of the toughest, most exciting sporting contests in the world.

When I was a child I used to go to the beach in the summertime, I rode my bicycle and had a wonderful time playing around. Older boys would teach me how to swim and we had lots of fun holding races on the beach. I think triathlon is inside us all somehow. For me, it’s something good and positive, reflecting a healthy, active lifestyle.

After arriving on Lanzarote we organised Volcano Triathlon in 1984 and from that day onwards, I almost felt like a kid again, running, cycling and swimming in the sunshine and fresh air. In the beginning we organised triathlons for sheer fun. It has become more serious over the years. When I started here on Lanzarote, there was no Spanish rule book. I remember the police asking us for the regulation/rules book. We had none, so we created our own triathlon rules.

Organising these small triathlon races gave me lots of pleasure. The entire Canarian community, all the local athletes and our guests here at Club La Santa were very happy with what we did. I was very pleased when the Spanish Triathlon Federation started up, finally we could get some help, and we were hugely grateful for that. By now I was deeply involved with this outdoor sport and while finishing my first race at Kona Hawaii in 1985 I saw the same volcanoes that we have here on Lanzarote. That was very positive for me, and the idea came to me to try to bring Ironman here to Lanzarote, and with help from many that happened in 1992.

Now I was involved with IRONMAN, and for me IRONMAN in Hawaii was the start of this contest. Now we are a part of history, but back then not so many people understood the philosophy of triathlon – especially here on Lanzarote. No-one really understood what we were trying to do. My dream was that, for one day in the year, we would have the world’s eyes on this small and very special beautiful island.

Over the years we have improved and today I am very proud that the island of Lanzarote has taken this sport and race into their hearts. We as organisers have the task of continuing our work and creating new races for new generations. As organiser I have made many mistakes, and this has been a tough ride at times. What helped me through was that our volunteers were giving their very best and the athletes were happy with what we did.

Some of the best moments for me have been when the Spanish National Triathlon Team has done well, and within the last few years Spain has enjoyed great results in short and long distance triathlons. This has showed us we are part of something big.

One of the greatest moments here on Lanzarote was when the first athlete from Lanzarote crossed the magic finish line in Puerto del Carmen and when Maribel Blanco, Virginia Berasategui and Eneko Llanos became the Champions of Ironman Lanzarote.

There are so many wonderful moments in my triathlon life, but one I look forward to each year is when I am the Official Ironman Lanzarote hand shaker. To me that is a huge honour. Ironman Lanzarote is here to stay; we will hopefully grow to be one of the world top three races.

Today, we are in the top 10 and with help from our Lava Island, the climate, the people of Lanzarote and all the athletes returning year after year, together I’m convinced that we will reach our dream.

Click the video below, to see them celebrating 25 years of IRONMAN.