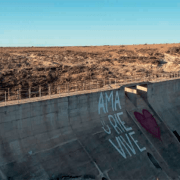 Tour guide David Penney leeds the way up to the largest engineering project on Lanzarote – the ill-fated dam at Mala. 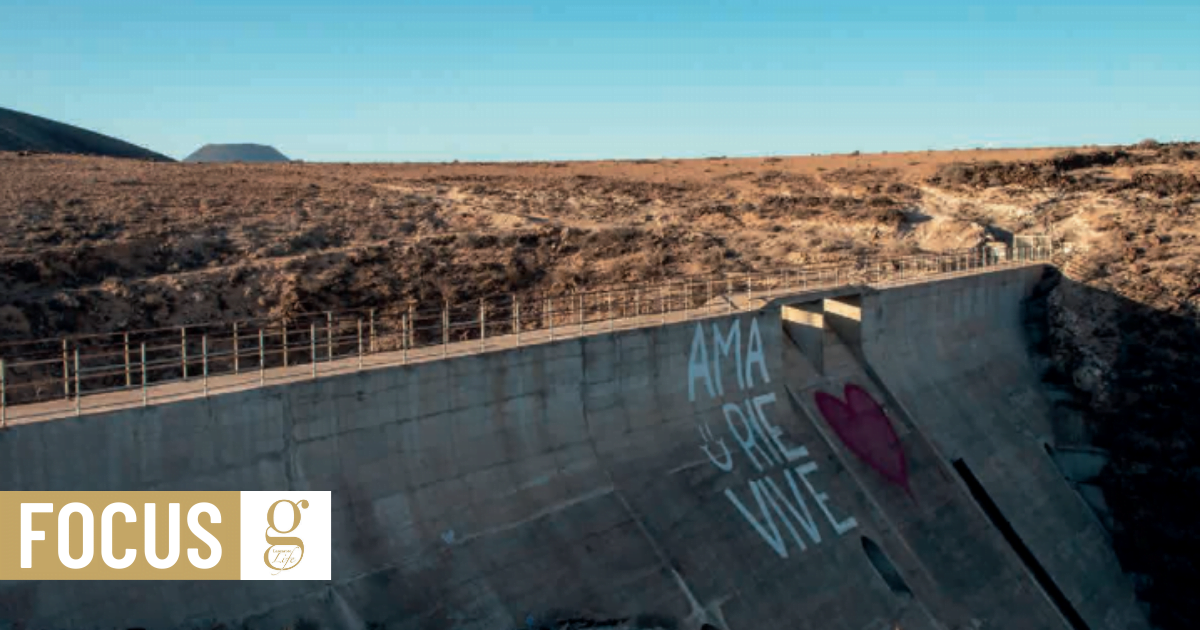 Time: Allow up to 3 hours

Type of walk: Linear. If you don’t have a car, you can use bus number 7 or 9 from Arrecife to Mala.

Notes: Take special care on and around the dam.

To get to the dam at Mala, we took the turning at the children’s play park in the north end of Mala, drove past the pretty wee church and continued over the bridge which crosses the LZ 1 main road to the north. Once over the bridge, we parked our cars in the space, turned right and followed the track heading north, which runs parallel with the LZ 1.

We continue walking past the vehicle access track on our left, which was created to get to the big aljibe. We carry on to a low, volcanic, rock wall and turn left along a track towards the base of the dam.

This leads us to an area known by the locals as Charco de La Laja. There is a natural flow of water just above the reservoir which cascades down to be held in the Charco, where the farmers draw water. In the late 50s, local farmers looked to this area as a source of water to irrigate their fields to grow their produce.

I have seen a pick-up truck with a water tank on the back arrive there several times, and once helped a local farmer set up a big hose and a pump from the reservoir while we chatted about their dependency on this source of water to grow the veggies to feed their families.

Unfortunately, when we visited this year the reservoir was completely dry due to the lack of rain over the past few years. However, I have been there several times when the reservoir has been overflowing and running down the track towards the ocean.

The last time I saw it full was in 2016, when I took a few friends there. They were amazed to see a constant flow of water which created a waterfall. The area is totally different now as the only evidence of water is a waterline showing where the water level was. When full, the reservoir attracted insects, which attracted birds etc, and was often full of life.

We now head back to where the cars are parked before starting the gradual trek up the track towards the dam. It’s a fairly wide track, as vehicles needed to get up there to build the dam.

When the track levels out, turn right and walk over towards the area which brings you level with the top of the dam. You can now look over to the “bridge” and also see the big reservoir area which would normally have held the rain water.

There is a sign here at this point advising you that it is dangerous and that you shouldn’t proceed any further.

This dam was built on the instructions of Franco and is typical of structures he requested to be built on Spanish-controlled territory. It was proposed in the early 70s but not completed until 1979.

Unfortunately, the dam was poorly-constructed and leaked badly, so it could not hold the volume of water intended. Also, the desalination plant was built in the mid 60s , meaning that the dam became redundant and was never fully operational.

Initially there were discussions about building a second dam in the adjacent valley of Barranco de Teneguime, which would have handled the extra volumes needed as the population grew and tourism was getting established. But it never went ahead.

The main pumping equipment has been removed from the dam and the barriers on the bridge are eaten with rust and the bases are crumbling, so are very dangerous. The dam can be seen from the LZ 1 when you are driving north, and often people comment on the “graffiti” on the front facade. When I first saw it I wasn’t happy, but when I translated it I felt it was OK, as the message fits in with my motto: “Love, Laugh, Live”.

This ravine – the Barranco del Palomo – was chosen because the valley continues up to Peñas del Chache. This is the highest point on the island and a natural catchment area for the rain water. The barranco has had man-made walls built at intervals to guide the flow of the rainwater, as it can be very destructive when we get heavy downpours. I enjoy exploring these areas to see the spectacular changes created in areas which are often dry and barren.

After a juice and snack break we headed back down the zig-zag track to our cars. There are several bars in Mala and Guatiza where you can stop off for a beer at the end of your walk.

For further information about walks around Lanzarote please contact, DAVID Penney via email: lanza888@yahoo.com OR via WhatsApp message 0034 649389888.