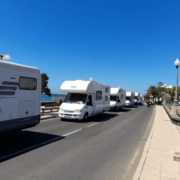 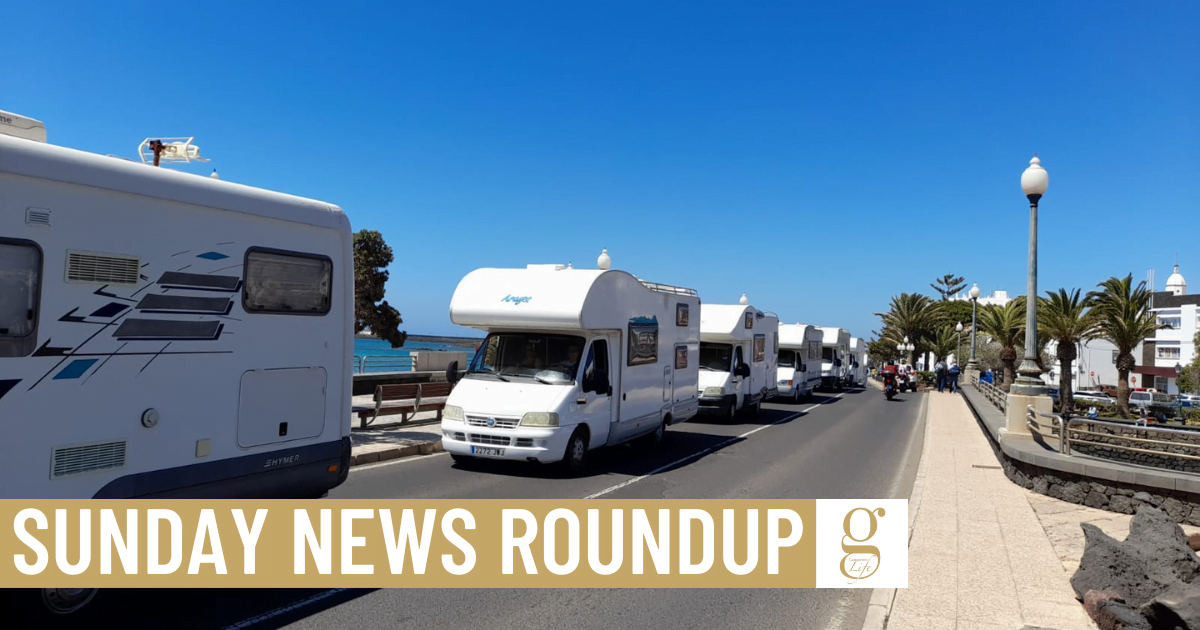 Scores of camper vans paraded through Arrecife and Costa Teguise yesterday in a protest against the lack of camping facilities on Lanzarote.

Heading for the coast in a camper van in summertime is a popular pastime on the Canaries, but Lanzarote campers currently have no official sites where they can do this. Papagayo’s camping site – the only one on the island – has been closed for over a year, although the Cabildo has stated that it will re-open in July.

Campers are calling for the re-opening of Papagayo and the creation of other sites where camping can take place.

Almost everyone seen in Arrecife town centre was still wearing masks yesterday, despite the new law that says they are not required outdoors when 1.5 metres of personal space can be observed.

On Calle Real, the vast majority of people continued to wear masks, while mask use was compulsory at the town’s Saturday market. Many people seemed to have decided that keeping the mask on was more convenient than taking it on and off again repeatedly when entering and leaving shops.

Away from the city centre, at the Charco and the seafront, more people could be seen enjoying their new freedom, although mask users were still in the majority.

Protected species, not an ornament

A Puerto del Carmen restaurant has been reported to Seprona, the Guardia Civil’s wildlife wing, after using a protected species of plant as table ornaments.

Aeonium lancelottense, or the Bejeque de Malpaís, is a succulent that is only found on Lanzarote, mainly in the malpaís area of the north. Like many other aeoniums, it has a rosette shape, with pinkish leaf tips.

As a protected species, it is forbidden to pick, cultivate or transport the plant.

The 37th Canarian Music Festival will commence on 30th June, bringing four classical concerts to Lanzarote and one to La Gracisoa.

Concerts will commence on the 30th with a performance of Saint-Säens’ Carnival of the Animals at Tias Theatre.

Two concerts by the popular Trio Arriaga will follow, on the 8th and 9th of July at La Graciosa and San Bartolomé’s theatre. On the 17th   the Baviera Philharmonic Chamber Orchestra will perform a hugely popular programme including Barber’s Adagio and John Williams’ Schindler’s List Theme at Arrecife’s Teatro El Salinero.

The last concert will be a programme devoted entirely to the genius of Bach, performed by the Baroque Orchestra of Freiburg at Jameos del Agua on the 22nd.

All concerts begin at 8 pm, and tickets can be booked at http://www.gobiernodecanarias.org/cultura/37CLfestivaldecanarias/es/

It’s scorchio all week this week, according to AEMET. There’ll be plenty of sunshine every day, with maybe a few clouds in the mornings, and temperatures will remain in the low-to-mid 20s, heating up to peaks of almost 30 degrees Celsius by the end of the week.  A fresh alisio breeze from the north will keep things bearable, but this is definitely a week not to forget your sunblock and floppy hat.

Where you can be you
Scroll to top