Those tourist beaches must be full of luxury watches and diamond earrings, right? And what about all that pirate gold hidden around the island? We went to Famara beach to chat to metal detecting hobbyist and YouTuber Roger Guedes about Lanzarote’s glittering treasure. 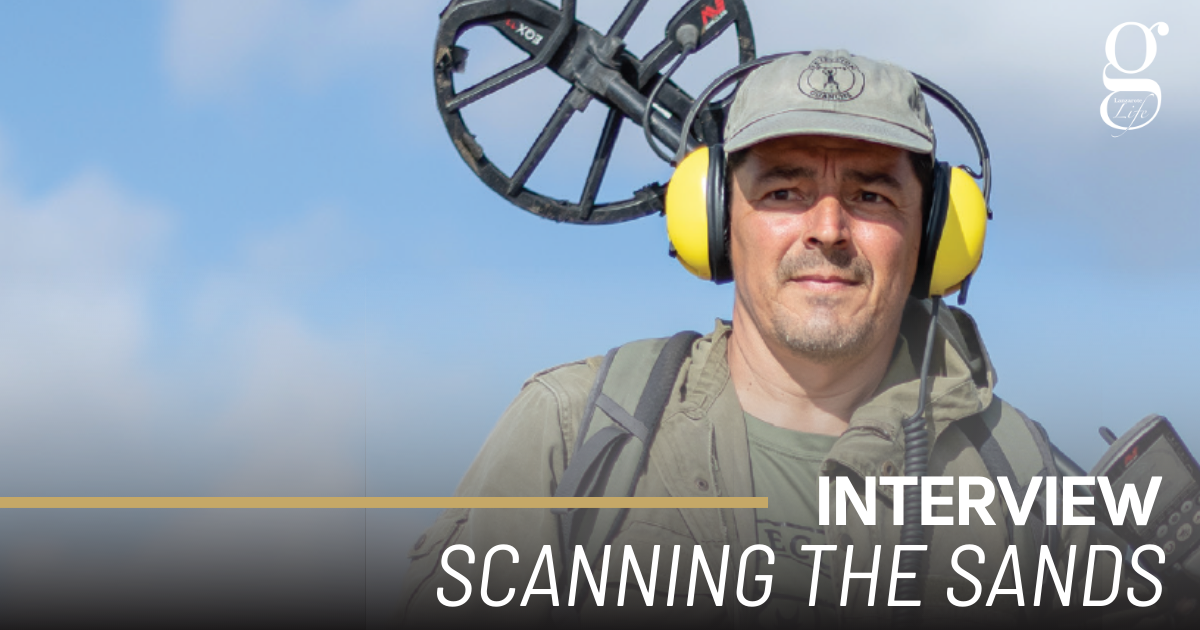 Roger Guedes is a restless type. He’s completed three Ironman races in the last ten years, but when he was laid off from his job a few years back he decided to look for a new pastime.

ROGER, HOW DID YOU START METAL DETECTING?

I’m an active person. I’ve completed three Ironman races, and I am a keen runner and swimmer. But when I was laid off a few years ago I started looking for new things to do and soon got hooked on metal detecting videos. I thought I’d do something here on Lanzarote.

ARE YOU A TREASURE HUNTER?

Not at all. It’s a hobby first and foremost. You won’t make a living with a metal detector, but I get a lot of enjoyment out of it. I’ve got a hunting instinct, and I’ll often visit the same beach three times in a day. I also think it’s therapeutic – my father died during the lockdown, and I found that going out metal detecting was very helpful for me. It gave me something to do, time to be alone and process things.

WHAT ABOUT THE LEGAL SITUATION? ARE YOU ALLOWED TO DETECT EVERYWHERE?

There’s usually no problem on the beaches, but on private land I’ll normally need to get permission from the landowners. It can be tiresome and that limits my activities. I’ve also been allowed to help with clean-ups – I was on La Graciosa last year cleaning up the campsite there – mostly old tent pegs and even some gas canisters.

WHAT ABOUT YOUR DETECTOR?

I sent off for it. You can get cheap ones, but you won’t get a decent one for less than €300, and you should go for European brands rather than cheaper Chinese ones. Mine’s an Equinox 800 from the Mundodetector shop in Madrid.

WHAT’S THE LARGEST FIND YOU’VE MADE?

An old pick axe. I’ll often try and restore things like that.

ANY OTHER NOTABLE DISCOVERIES?

I’ve found rings and jewellery, as well as bullets and shells left over from when the island was used for army manouevres. I once found a mobile, took the card out and worked out who it belonged to from bookings that the owners had made. Then I contacted her and returned it.

It was my son’s idea, so we set it up together. He started filming me, but now I often just take a tripod, film myself and edit it later.

AND YOU’RE WEARING THE DETECCION GUANCHE T-SHIRT AND CAP, TOO.

It’s a bit of branding, really. I spoke to a friend at the César Manrique Foundation about using the devil, and he told me not to copy it directly, so it’s not exactly the same. And it’s holding a metal detector. I wear military-style green fatigues because they’re perfect for the hobby, and also because they mean I don’t get noticed as much.

IS THAT A PROBLEM?

Not really. Children often follow me – they’re fascinated by it. I’ll often give them a small find.

DO YOU SEE OTHER DETECTORS?

Sometimes, yes. There’s a British guy who offers to locate lost property for holiday makers, and sometimes holiday-makers bring a detector with them to use on the beaches.

YOU’VE DONE SOME DETECTING UNDERWATER AS WELL, HAVEN’T YOU?

Yes, I borrowed a detector for that, and it’s a lot of fun. But there’s a lot of rubbish out there in the sea as well.

IS THERE MUCH TO DISCOVER ON AN ISLAND THAT DIDN’T EVEN USE METAL UNTIL 600 YEARS AGO?

Yes, but it’s not like places on mainland Spain, where there is a lot more history and wealth. The main challenge is more to do with the fact that islanders never really had much money.

On mainland Spain you can find silver coins, but my father told me that in days gone by they never carried coins in their pockets the way most of us do these days.

YOU ALSO FIND COINS. HOW MUCH MONEY WOULD YOU FIND ON A NORMAL OUTING?

I’d love to go to La Graciosa again, and get permission to detect up around parts of Haría. I’d also like to team up with an archeologist who could help me identify certain items.

Roger puts his headphones on and starts sweeping the detector across the sands of the beach, sweeping the detector from side to side. Almost immediately he has an audience – a fascinated small boy whose mum lets him watch for a while. It isn’t long before he gets a signal – the higher the reading the more metal content is there.

His first discovery is a ring-pull. Roger doesn’t have to say anything to let us know what he thinks of this, but he puts it in his pouch anyway – all rubbish is correctly disposed of, and any holes he digs in the sand are quickly filled in. In the next ten minutes he digs out a scrap of lead from a fishing weight, a beer bottle top and the base of a light bulb.

Later, Roger sends us photos of everything he discovered that day – there’s plenty of trash – ringpulls, tinfoil, bottle tops and lead weights, but also 17 coins of various sizes. The total is around five Euros, plus 25 pesetas in the form of the old doughnut shaped coin that was taken out of circulation twenty years ago.

Roger’s videos are on the Deteccion Guanche YouTube channel.

Airport updates
The height of excellence