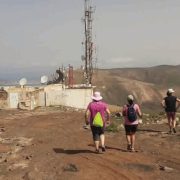 Tour Guide David Penney leads a group along the highest of Lanzarote’s heights, a place where every step leads to magnificent views and new discoveries. 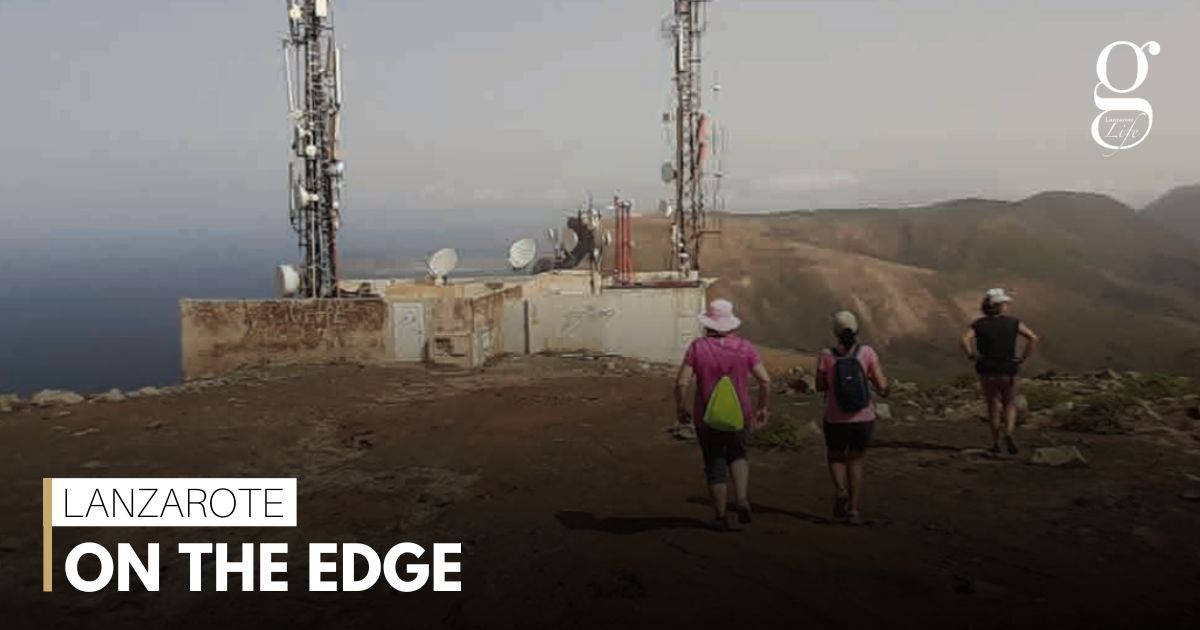 We parked our car in the car park at the Mirador. We bought some drinks and displayed the receipt, as there is a parking charge otherwise. Supervised parking is a good idea, as vehicles have occasionally been broken into when left in other sites.

We cross over the LB-10 road and walked up past the goat farm towards El Bosquecillo, the picnic area on the cliffside. 2ust before the carpark at El Bosquecillo, we head along the track which leads off to the right. This is easily identified because several years ago the track was rebuilt with stones due to the heavy rains which had washed it away in places.

We follow the track as it leads away from the picnic area and, heading north, we arrive at an amazing viewpoint along the edge of the cliffs, which looks down to Famara Beach.

We pass an area on the left which has eroded quite badly from exposure to the wind and rain. Attempts were made to plant out some small bushes on the hope that the roots would become established to prevent further erosion, but unfortunately it hasn’t been successful.

This track is an access route to an electricity substation further along, and they are currently building a long, low-lying wall of volcanic rocks which is intended to stop the heavy rains from washing the track away which would prevent maintenance vehicles from accessing the substation.

Next, we come to an abandoned project which originally was introduced by David Riebold to Harya council back in 2003. The cloud catchers were a brilliant idea – a natural means of capturing water to assist the young trees which had been planted along the hilltop.

The idea was so simple, yet effective: as the clouds drift over the hilltop, they come into contact with a vertical mesh board. This collects the moisture which runs down to be collected in a trough which has a pipe supplying the water to some sunken tanks.

The objective was that, once the trees became established, they would source their water by intercepting the moisture from the clouds themselves, adding water to the ground and reducing soil erosion.

Phase 1 of the project was a success but in the winter of 2005 the cloud catchers were destroyed by Tropical Storm Delta. The second phase began in 2011 but “complications” with red tape and obstacles from Haria council meant that it didn’t go ahead as planned and the project was abandoned.

We continue heading north, where some new ground works are being undertaken over to the right of the track, and on closer inspection we realise that terraces are being created to allow vegetation to become established. A considerable number of materials have been transported up here along with hessian-type matting which covers over some compost areas.

This appears to be another attempt to utilise a couple of areas which could be the start of a future mini reforestation project. I will certainly revisit a few times to see how things are progressing.

The electricity substation was getting a much-needed restoration and paint job and some of the bases of the antennas needed maintenance as the long lanky antennas were swaying around in the wind.

At the far end of the hilltop, we reached our destination which is the huge wooden cross which sits on the top of Montana Aganada overlooking Haria. This cross was originally intended for a church in Haria but turned out to be too big. A smaller cross was used, and young local men carried this cross up here on their shoulders over seven days in 1967.

We stopped to admire the view and enjoy a few swigs of water before heading back along the same route back to the car.

For further information about walks around Lanzarote please contact, DAVID Penney via email lanza888@yahoo.com OR via WhatsApp message 0034 649389888