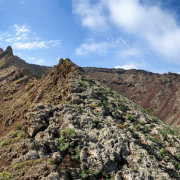 It’s probably not the most popular volcano name at the moment, but the walk from Yé to the lip of this spectacular caldera is one of the island’s shortest but most spectacular volcano trips. If you haven’t tried it yet, make it top of your list for when the lockdown ends.

Getting there: Car. (The one daily bus from Arrecife to Yé leaves at 7.40 pm)

Tips: The amazing views here are at their clearest after a rain shower. On windy days, take a cagoule or windcheater.

The walk starts in the small village of Yé, a couple of hundred metres east of the pretty white church, on a dirt path next to the yellow LZ-201 km 4 sign. Parking may be difficult to find on a weekend, so be prepared for a bit of a walk to this starting point.

The volcano is already an impressive sight ahead of you. At 609 metres it’s the highest peak on the island, and its classic volcanic cone shape dominates the north of the island. This volcano erupted just 5,000 years ago and transformed the landscape here, creating extensive rocky lava malpaís (badlands) and the longest submarine lava tunnel in the world, an extension of the tube that includes the Jameos del Agua and Cueva de los Verde.

You’ll walk past well-kept vineyards for the first stage of the walk, and depending on the time of year, you can see how the vines are cultivated, lifted from the floor with pieces of wood or rocks, and cut back and burned in winter. This path is lined by a fence decorated with scores of plastic bottles, which rattle and flash in the wind and sun and scare off birds.

Out of the vineyard, the path starts to get steeper and wilder, and you’ll find yourself in a landscape that’s unique to this part of the island, where lichen covered stones and tumbledown stone walls host fig trees and bushy tabaiba plants. You’ll soon pass a picturesque, lonely palm tree, at which point the going really starts to go uphill. It’s not that difficult, though, and shortly the ground levels off again as you approach one of the island’s most perfect volcanic craters.

Here, the jagged rim of the volcano makes it clear why it is named after a crown and the views behind you, of the islands of the Chinijo Archipelago, are outstanding. There’s a steep, narrow path leading down into the centre of the crater, but you’re not advised to take it – firstly, a number of unprepared hikers have had to be rescued from this crater, and secondly, there’s not much down there that you can’t see from the rim.

The adventurous will enjoy scaling a short distance up the rim on either side, which will take you even higher, but do take care to stay clear of the edge, and don’t disturb wildlife – you’ll often hear the shrill cry of a kestrel in this wild place.

My first ever attempt to climb up the Monte Corona, the highest volcano on Lanzarote (609 metres), was from the wrong side about 11 years ago, shortly after I arrived on the island. I was with an Irish friend and she said she knew the way up, so I just followed her. Very soon the “path” disappeared and it was one step up and two steps down in the loose shingle and picón. I realised that we needed to abort, as it was too challenging and not the correct path.

The “easy” way up, as I found out later, is from the path which starts off just along from the church.

Over the years I’ve climbed it dozens of times and I have experimented to give some variety to the walk and explore different route options. If you want to extend the descent down you can leave the crater behind you and take the path to the left as you look down to the church. This path takes you to the other side of the village towards Guinate and means you will need to walk back along the road to your car. Please ensure that you stay on the path as it is a working area for the local farmers.

Clambering down into the crater is not permitted any more, even though there is a path down to the inside. Also I would discourage anyone from walking around the actual ridge as it is quite dangerous due the the eroding rock and very sharp edges. I have seen some people set off around the ridge and then the cloud level drops and completely prevents visibility.

You may be aware there is another volcano with a similar name just outside the tourist resort of Costa Teguise, but it is called Montaña Corona.

Lanzarote on the mend 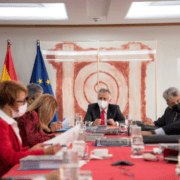 Bouncing Back: The Ally Shop
Scroll to top