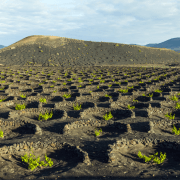 Last year, the Regulatory Council of Lanzarote Wine produced a documentary about the wine-growing area of La Geria with the aim of promoting the island’s vineyards and viticulture Featuring stunning shots of the island alongside commentary from historians, artists and musicians. Now,  part two has been released.

The four-part series, Lanzarote Wines: A Story to Tell, commenced last year with the short documentary , El Relevo This August the second installment has been released, titled La Geria: Inspiration, and it focuses on the transforming effect of the violent volcanic eruptions of the 18th century, which wiped out traditional villages but created the conditions for a wine-growing technique that is unique in the world.

The first film started with unforgettable  images of 89-year-old Francisco de Leon digging a pit for a vine barefoot in the dawn, as he did when he was a boy. The second is just as captivating, with local artist Beni Ferrer singling and dancing among the zocos of La Gería.

Currently only available in Spanish, the films have been beautifully produced by Liken Films

Is Lanzarote ready for Level 1?

Madrid goes to the polls

Rojillos are back in the game!