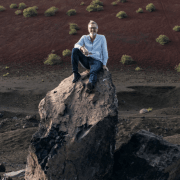 An island as stunning as Lanzarote is full of photo opportunities, but there are some places that turn up again and again. If you want to combine a fascinating short walk with snaps of one of the island’s most iconic volcanic marvels, then a trip to Montaña Colorada is in order.

Colorada means “coloured”, but in Spanish it’s usually used to refer to red. And once you know that, it’s not hard to see why this volcano is so-named. On its southern side it displays a rich, brick red colour that becomes even more intense as the light slants onto it at sunrise and sunset. Caused by oxidised iron in the earth’s crust, it creates one of the most vividly coloured mountains on the island.

That means it’s difficult to miss on the right about two kilometres onto the LZ56 after you’ve turned off the LZ30 road through La Geria’s wine country. There’s a parking area, and the circuit of the volcano is a short walk that should take you an hour at most.

Just walk up towards the volcano and start to skirt round the right-hand, most colourful side, and after about 15 minutes you’ll end up on a plain that looks like it belongs on Mars rather than a Spanish holiday island. And plonked right in the middle of that plain is the biggest volcanic bomb in Spain.

A volcanic bomb is any stone over 2.5 inches big that has been formed by lava flying out of a volcano. The globs of liquid lava often form rounded shapes in the air before solidifying and landing. Any walk in Timanfaya or the volcano regions surrounding it will reveal several bombs of different shapes, but very few of them reach a large size.

This bomb is roughly-dome or capsule shaped and at least five metres high. Embedded in the plain where it hurtled to the ground less than 300 years ago, it’s appeared in hundreds of thousands of selfies and snaps because of its weird appearance, with the red volcano dotted with green pom-poms of aulaga plants in the background.

Near the bomb there’s a rough pathway up the volcano’s edge that can be scaled by the more adventurous walker. It leads to a strangely wild crater that’s filled with jumbled, twisted striated rock. You can clamber across and descend on the far side of the volcano.

Otherwise it’s an easy circular walk around the foot of the volcano, with great views of Lanzarote’s central ridge of far more ancient volcanoes.

The route to the lava bomb is fairly easy and non- challenging and is regularly visited by tourists and residents. One of the first things you can’t fail to notice is that the majority of the volcanic rocks are covered in lichen (see photo).

This lichen is a very good indicator of clean air quality. If the air was polluted, like some large cities, then the lichen would not survive. The locals describe it as ‘bearded moss” and stroke their chins when describing it. But, unlike the soft, green moss you may find in the UK, the lichen found on Lanzarote is stiff, dry and brittle from the wind and sun.

One side of Montaña Colorada is red, which is caused by iron oxidation. When the sun shines on it it can be seen very clearly from the roadside. The locals call it ‘the blushing face of the mountain’ and gently slap the side of their faces when describing it (to redden it).

Your Captain Speaking!
Scroll to top