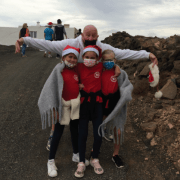 Lanzarote tour guide David Penney leads a bunch of little Santas on an easy coastal walk to the little hamlet of Los Ancones. 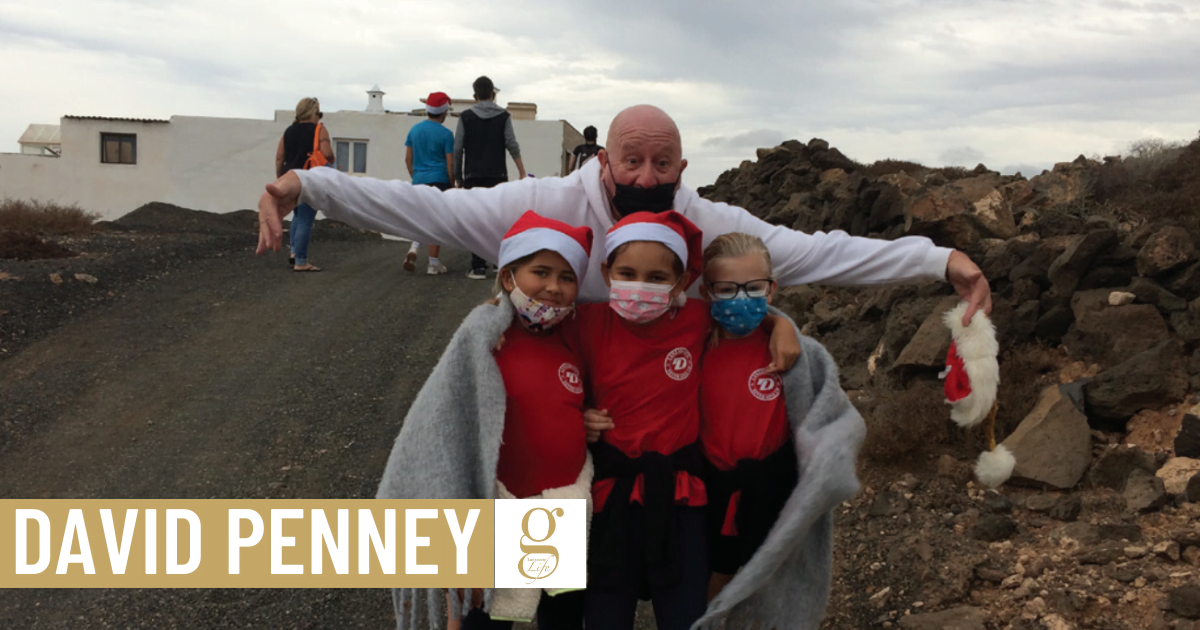 I chose this walk for a couple of reasons. Firstly, it is suitable for families of both residents and tourists, as it is easily accessible and non-challenging and secondly, you don’t need a hire car or a bus if you are staying nearby in Costa Teguise.

We all met up at the big car park next to the HD Beach Resort hotel in Costa Teguise, with the ages of the kids ranging from 8 years old up to 65. As I don’t have any children
(that I know of, anyways). I collaborated with Kristine and Kerryann of Lanzadance, who brought along some of their dance students. Knowing that the walk would be featured in the December edition, we decided that we would get in the spirit of things and wear our Santa hats.

The path runs along the coastline, and we headed off northwards with the sea to our right, passing by the Sands Beach complex on our left. We continued along the paved path until the far end where we were forced to turn left.

There’s a dirt track on our right which is next to the first rural property that we pass en route, and you can’t fail to notice the immaculate garden and paintwork of this well-kept home by the sea.

We were pleased to take advantage of the opportunity to remove our face masks now as we were in the campo and not near anyone else and kept our distance along the route.

Now we simply follow the well-established dirt track as it continues north, keeping the ocean on our right-hand side. There is a small track which hugs the coastline, but it is fairly rough and challenging in places and not really suitable for children.

After about 45 minutes from when we started off, we arrive at the tiny hamlet of Los Ancones, which consists of a few dozen residents and a couple of tourist-registered properties for holiday lets. We now all put our masks back on while we’re in the village.

At this point I show the kids a photo of an old bike in a garden which I took on a previous visit and set them off on a challenge, with a prize of 2 euros for the first person to find it.

The excitement had the kids running both ways round the circular track around the village and fairly quickly they were successful.

Now the decision had to be made who was the first to find the bike, as two groups reached it at the same time. After our discussions and several suggestions it was agreed to share the prize money between the winners, which resulted in me giving them 6 euros!

The locals in the village must have been wondering what had happened to their quiet little village when a group of 17 people arrive wearing Santa hats in the middle of November.

We took a few moments to eat our snack bars and drink some water, as it was a clammy day with temperatures in the low to mid twenties. Warm, but for some of us locals that requires a hoodie or jeans.

After completing the circular track around the village we are now ready to take the same track back to Costa Teguise. About half-way back we decided to make a wee detour from the track as it was low tide, and headed down to the rocky beach for a photo stop.

We rejoin the main track and continue back to the end where we put our masks back on and return along the coastal path back to our cars.