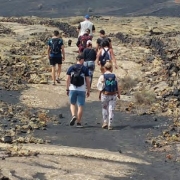 Tour guide David Penney leads a group through wine country and across a river of volcanic lava, in the gorgeous rural centre of the island. 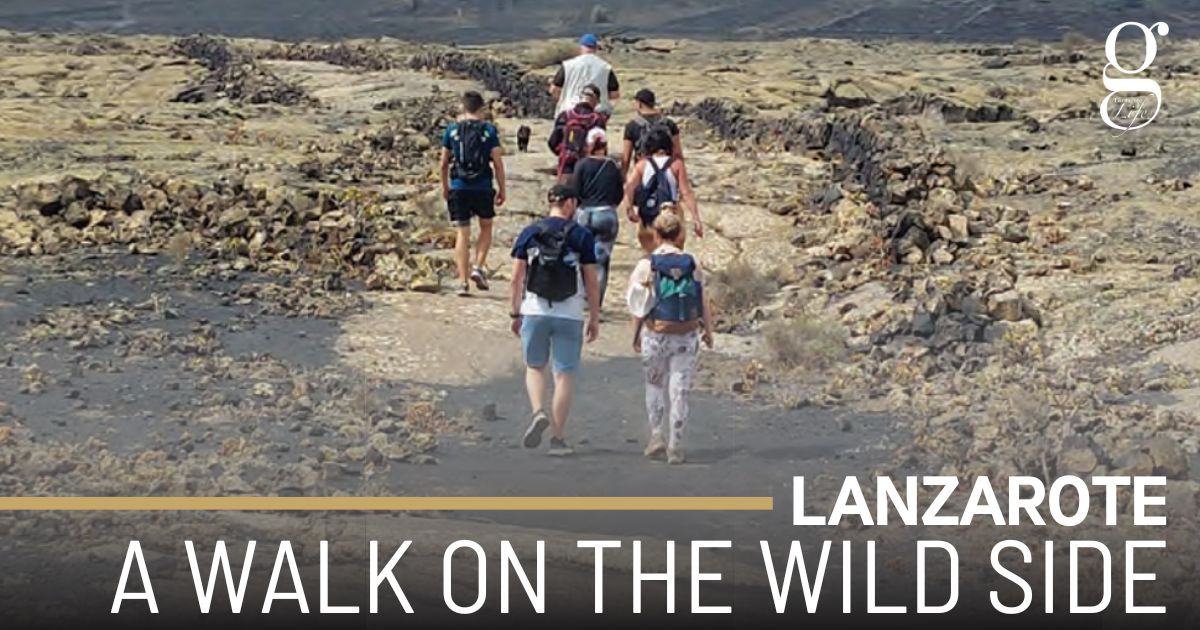 Our party was formed of nine people from six different nationalities accompanied by two wee doggies, Coco, and Neo. We parked at the lower carpark next to the vineyards behind the rural hotel at Finca La Florida – just off the LZ30 road through La Geria. At this time of year, we had arranged to set off early at 9 am to ensure we finished before the fierce midday heat.

We left the hotel car park, walked to the junction in front of the hotel and then turned right along the side road called Calle Sobaco, which is signposted to Bodega Los Bermejos. The mustard-coloured building here will serve as a useful landmark later in the walk.

Continue along this road past Bodega Los Bermejos and follow the road round a couple of bends to the end, when it becomes a track. This track takes you across the smooth lava flow of pahoehoe lava. Pahoehoe is a word from Hawaii meaning “coiled rope”, and there are several good examples along the track where you can see these distinctive swirling patterns in the lava flow.

Pahoehoe lava is often contrasted with the rough, sharp AA lava, but this type of lava had a much lower temperature than the AA lava and cooled down more gradually, forming a smooth crust rather than the rough jagged surface of AA lava. This makes it a lot easier to walk across.

On either side of the track you will see that the landscape is peppered with tiny jameos, where lava bubbles broke through the crust of the lava. This allows you to get a glimpse beneath the crust.

We carry on to the end of the lava field, passing the rural white house which is set back just off the road. This house is guarded by a large dog on a chain but keep to the track and you will be OK.

As we join the LZ 58 road we turn right and walk along the road up over the small hill, continuing past an old, abandoned property with metal gates. Continue along the road for about half a kilometre until you see a farmer’s track branching off to the right. We’re now skirting around Morro de Chibusque, so we leave the road and continue past a finca set back on the left, walk past this to the end of the track, which is a T junction, turn right here and start the return section of our route.

Now we walk past an old finca on our left which has just recently been occupied by a guy from Colombia who keeps two big dogs on a chain. He has put three big wooden crosses at the side of a fig tree by the entrance to the old finca, which don’t give the impression he welcomes visitors.

Keep on the track, passing another old, abandoned, unfinished finca on the left and head towards the other building which is almost on the track. This is easily identified as it has a new sign on the gable end saying, “NO hunting”. As we walk past the building, we will see the track comes to an end, and there are some signposts directing you to an area for parking vehicles on the picon area on the left. At this point it may be difficult at first to spot the path across the pahoehoe lava, but you should find it within a couple of minutes as it is an established route across the lava field.

The path is a little more rugged than the first path across the lava field and takes you over similar terrain as before. If you look ahead of you in the distance you will see the mustard-coloured finca which we passed as we joined the track earlier.

As the track over the lava field comes to an end you will see some large fig trees which are set behind the zoco walls. We were in luck as the figs were just starting to ripen ready to eat.

We turn left at the yellowy-orange finca, as this is the start of our way back to Finca la Florida where we started from and, once we returned, we all enjoyed well-deserved coffee and cake while sitting in the shade on the terrace.

Over 300 athletes travel to Yaiza
Scroll to top