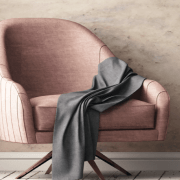 If you’ve never considered wallpaper in your Lanzarote home, why not think again? It could provide the perfect touch you never knew you needed.

Wallpaper originated as an imitation of the tapestries that wealthy families would hang on their walls for decoration and insulation, but it wasn’t until cheap colour printing made wallpaper widely available in the 19th century that it really caught on.

Industrial Britain became one of the world leaders in the wallpaper trade, and its printing trade papered the walls of millions of homes. It was an easy way to brighten up drab, dingy interiors and wallpaper could be seen in private homes throughout the country, although public buildings rarely used it.

This flourishing trade allowed creative designers such as Owen Jones and, especially, William Morris, to produce gorgeous designs and patterns, many of which are still available today. Morris taught “Have nothing in your house that you do not know to be useful, or believe to be beautiful”, and his wallpaper designs fulfilled the second criteria magnificently.

Nowadays, patterned wallpaper seems to have fallen out of favour a little. The fashion for minimal interiors or no-frills Scandinavian functionality leaves little room for flowery, ornate motifs, and plain expanses of colour are generally preferred to subtler patterns. When patterned wallpaper is seen, it’s often as a deliberately retro statement – the films of Pedro Almodovar are a fine example of this.

The Canarian Cardón
The secrets of Spring

The Light Stuff
Scroll to top