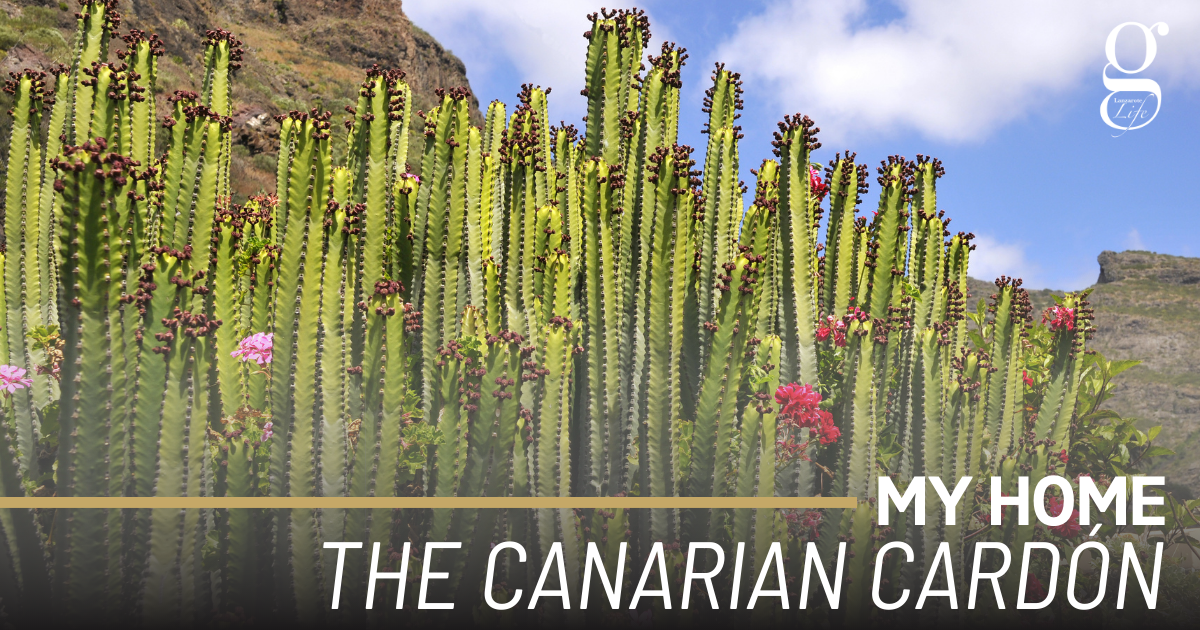 The cardón (known in English as Canary Island spurge) is a native Canarian shrub whose distinctive candelabra shape reminds us of a cactus, although it cannot be considered as part of this group.

It is naturally present on all the islands apart from Lanzarote, where it is believed to have become extinct in the wild, but remains widely used in gardening. On islands such as Gran Canaria and Tenerife, many natural habitats of the cardón have been destroyed due to construction and development, which has limited their presence to more rugged areas of the islands, such as ravines.

On the Canaries, the euphorbiaceae family to which our Canarian cardón (Euphorbia canariensis) belongs, is represented by some 40 species of plants with a wide range of different appearances.

The Canarian cardón can grow to a huge size, reaching up to 8 m in height, with 100 m2 of covered surface. Its fleshy stems have between 4 and 6 sides, each marked by a row of short spines. Its flowers are not very showy, but they are grouped at the ends of the stems, giving them a decorative reddish appearance, especially in the days before flowering.

The latex exuded by all euphorbias is mildly toxic, which explains why the cardón was once used by fishermen, who would throw pieces of the plant into the water to “stun” the fish. Once the fish were numbed, it was much easier to catch them. Medicinal and veterinary uses have been mainly aimed at treating skin problems and as an antiparasitic application.

In terms of landscaping, we’re very lucky to have the cardón, because on Lanzarote it thrives perfectly and with just a little care, can show us all its splendour. It is the perfect plant to combine with other xerophytic plants in large rockeries, but it’s commanding and distinctive shape can also be ideal for a garden area where we want to highlight it alone.

It consumes very little water, it does not require rich soil and does fine without pruning or any other maintenance. It is also a beautiful plant. What more could you ask for?

At Canariensis, it is one of our favourite plants for the gardens of Lanzarote.