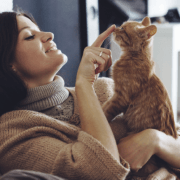 We can’t own people, so why are we allowed to own animals? It’s a question that is being asked more and more often and, interestingly, many of the people who are asking it are pet owners.

In 2015, New Zealand officially recognised animals as “sentient beings” with a pioneering law that placed strict duties of care on livestock and pet owners. It’s a sign of how, as we slowly recognise the complexity and sophistication of animal feelings, we’re also starting to think about our relationship with them.

Animals are legally regarded as property for good reasons. It allows them to be protected by law in the way private property is; it identifies the person responsible for the animals and, of course, it allows meat, dairy and other animal-based industries to exist.

Of course, most pet owners don’t see their relationship with their pets as similar to that of a farmer’s to livestock. There’s no profit in pet ownership – just the opposite in fact. The more fitting comparison is usually seen as that of a parent or guardian. In fact many pet owners see themselves as parent figures to their pets.

They call them “fur babies”, spoil them rotten and, in the UK, 9% say they love their pet more than their children.

But not all parental relationships are healthy, either. Animal shelters are full of the results of abuse, neglect and ignorance. While most of us know that having a child is a huge responsibility that will last for decades, pets are taken much less seriously and the results of this are appalling.

Some have even decided to stop keeping animals, but they are a minority. Sadly this is a still a tough world for any domestic animal that lacks a domestic environment, and it will be a long time before responsible people aren’t required to help sort out the mess caused by the irresponsible.

The Canarian Palm
It’s all about the people

Recipe of the Month: Creamy Coleslaw
Scroll to top