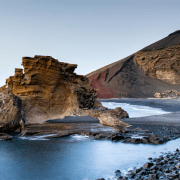 There’s a common belief that curves are natural while straight lines and geometric shapes are artificial. Neither is true, but both elements can make all the difference to your outdoor space.

Straight lines are more common in nature than we think, and that’s especially true on Lanzarote. First there’s a permanent ocean horizon visible from most of the island, just one of many straight lines imposed by the force of gravity.

Other straight lines can be seen in palm leaves, agave plants, the oddly geometric branches of the Canarian pine and on spider’s webs. Then there’s the symmetry that marks almost every living animal to a greater or lesser extent. Whether it’s a human being or an ant, there’s an invisible straight line along which both sides of the creature’s body are reflected.

Symmetry is one of the easiest ways to spot living things in nature, and geometric shapes also indicate the presence of life, whether it’s the triangles, cones and spirals of seashells, the countless examples of spheres and circles found in the natural world or the sharper angles of straight lines calm us and fill us with a sense of order. It’s that feeling of organised fulfillment we get when folding a sheet, straightening papers or making a bed. If the lines are nice and straight, something is going right, we think. The straight There’s a common belief that curves are natural while straight lines and geometric shapes are artificial. Neither is true, but both elements can make all the difference to your outdoor space.

A straight line is also the shortest distance between two points, a naturally efficient onedimensional edge that means no mess, no frills. And it’s that which explains why straight lines are so fashionable in today’s outdoors furniture.

The trend for sharp edges and straight lines has always been with us, but has been accentuated recently with the rise of infinity pools, decking and other simple, stunning linear elements.

It’s also a style that works brilliantly on Lanzarote. This is an island of stark contrasts and vivid colours, both of which lend themselves to the minimal geometrical style.

And nature is full of curves. Rounded leaves, the swell of a wave, the plume of a cloud, the sleek musculature of fish and animals, the dip of a bird’s beak, the bowed stem of a flower.

In our gardens and patios curves can be simply stunning when used correctly. A simple look at the way César Manrique uses rounded shapes at Jameos del Agua or Mirador del Río will show how they can provide a fantastic, space-age atmosphere, but they’re also there in natural lime kilns, windmills and the domed chimneys of San Bartolomé.

The current fashion for wicker furniture is the perfect excuse to put curves in your outdoor space, with this material especially suited to sinuous, undulating shapes. But curves can come in wood, metal, plastic and several other materials, too.

The key here is contrast. An exterior where only straight lines are visible will be too austere for many. But just one well-selected curve can throw the whole thing into relief. Similarly, too many curves can feel a bit “beanbaggy” and straight lines are required to bring a bit of discipline and order to a space.

The most important thing of all is to let your lines and curves speak for themselves, and to do that you need to eliminate visual clutter. Keep things as simple as possible, and avoid broken, uneven visual planes. These are fine in a subtle, overgrown rambling garden, but not so much on a Lanzarote poolside.

A proper shower
Scroll to top