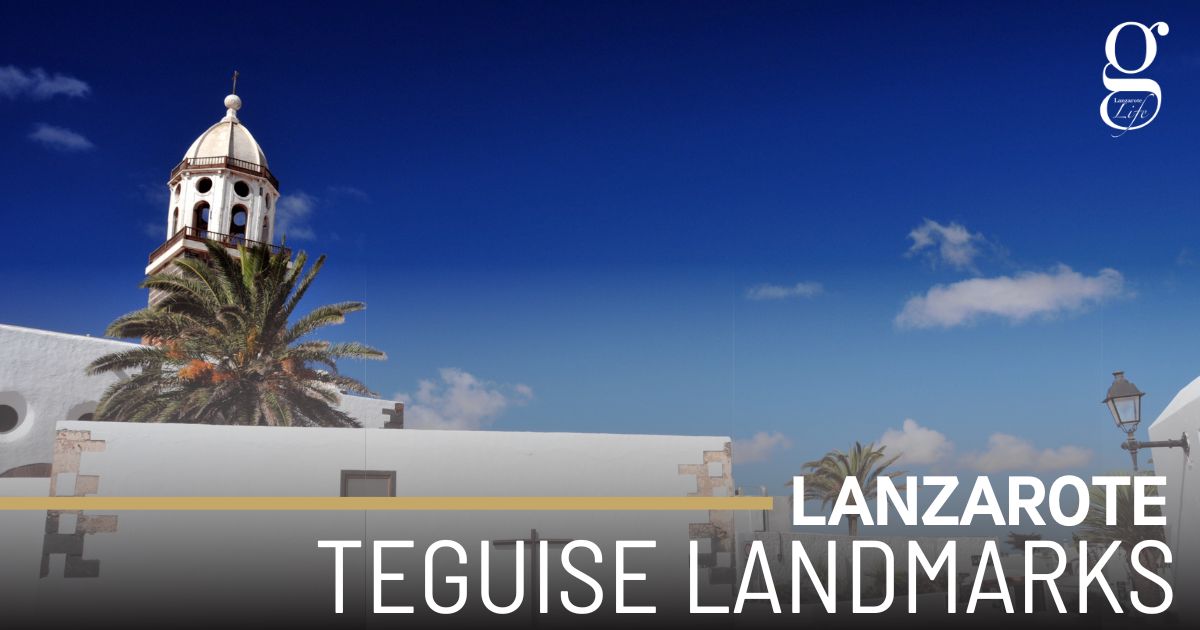 The long, flat white building opposite the brass lions in Teguise’s central square is one of the island’s architectural treasures – the Spínola Palace.

Built between 1730 and 1750, this was the home of several of the island’s military commanders before becoming the seat of the Spínola family in the early 20th century.

Renovated and restored, it’s a genuine treasure – full of colonial detail, with a beautiful patio.

It’s also been the home of the Timple Museum since 2011, reflecting Teguise’s importance in the making and playing of this iconic Canarian instrument.

The Castillo de Santa Bárbara is the oldest military fortress on the island, built in the late 16th century on the site of a tower originally constructed in the 14th century by Lancelotto Malocello – the Italian sailor for whom Lanzarote is named. The castle overlooks Teguise from the top of the Guanapay volcano, whose crater lies alongside the castle.

This fortress was built as a lookout point to warn of pirate raids and a refuge for when those pirates reached the capital.

Sadly, the castle is currently closed for renovation, as is the Pirate Museum within, but it’s still an atmospheric place with the amazing views you’d expect of a watchtower.

José García, known as Pillimpo to his neighbours, was a quiet farm worker who slowly turned his home on the edge of Teguise into a bizarre artistic paradise guided by his own unique vision.

Although he had no artistic training at all, he tirelessly created plaster statues of human beings, horses, cactuses, lions, and angels; displaying them in his garden and surrounding them with carefully arranged dolls, toys and any bric-a-brac that caught his eye. It wasn’t always popular – some called his house “the rubbish tip of Teguise”, but that didn’t deter Don José.

Every now and then he would paint all the statues a different colour – over the years they have been green, pink, and silver. García died in 2019, but his mystical, spiritual vision of Mara-Mao still attracts fascinated onlookers and is treasured by admirers of “outsider art”.

The Church of Our Lady of Guadalupe is the main church in Teguise, and one of the most beautiful on the island, with its white facade and brick-red belltower. Inside you’ll find some of the most important religious artefacts on the island.

La Ermita del Santísimo Cristo de la Vera Cruz is another church in the backstreets of Teguise, famous for its statue of Christ, which is paraded during Easter week.

A few streets away, near the Town Hall, is the Convento Santo Domingo, an impressive 17th century church that is now an exhibition hall, and further up the hill is the Convento de San Francisco – the church the only remaining part of this important monastery of Franciscan monks, overlooks a bronze statue of a Diablete giving passers-by a fright. WINDMILLS The wooden windmill that overlooks the market area is a popular meeting point for people heading down the hill for a bit of Sunday shopping. The larger stone windmill closer to the sports centre was just a stone tower until recently. Now the mill has been renovated.

People have always made their way to Teguise. Today, it’s the busiest place on the island every Sunday as coachloads of tourists head to market; but for hundreds of years the whole island made their way to the capital for one vital commodity – water.

The current marketplace is built on the site of the Gran Mareta – a stone reservoir of fresh water that existed before the island was conquered in 1402.

At its largest, this was a circular, covered water tank measuring 46 metres across, with a depth of 9 to 12 metres. Its capacity was more than half a million litres, making it by far the largest of the maretas on the island.

For 400 years islanders came from all over to collect water here, 200 camels arriving each week. All islanders were expected to come to the Mareta in the high summer months to help with cleaning and rebuilding the reservoir. In 1734, villagers from Femes refused to do so, saying that those who lived closer were getting unfair advantages. The mareta became less important as Arrecife became the island’s capital and built its huge reservoir in 1902. Shipments of water by sea also reduced demand.

The Mareta was finally closed in 1963, the year before the first desalination plant opened and mains water came to Lanzarote. It has long been built over. Only the name remains.