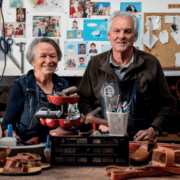 Félix Hernández’s shop at C/Hermanos Zerolo 22 in Arrecife is an amazing step into the past, but also very much a going concern. The sign outside simply says Zapatero Félix, but once you step inside you’re stepping into the heritage of the island. 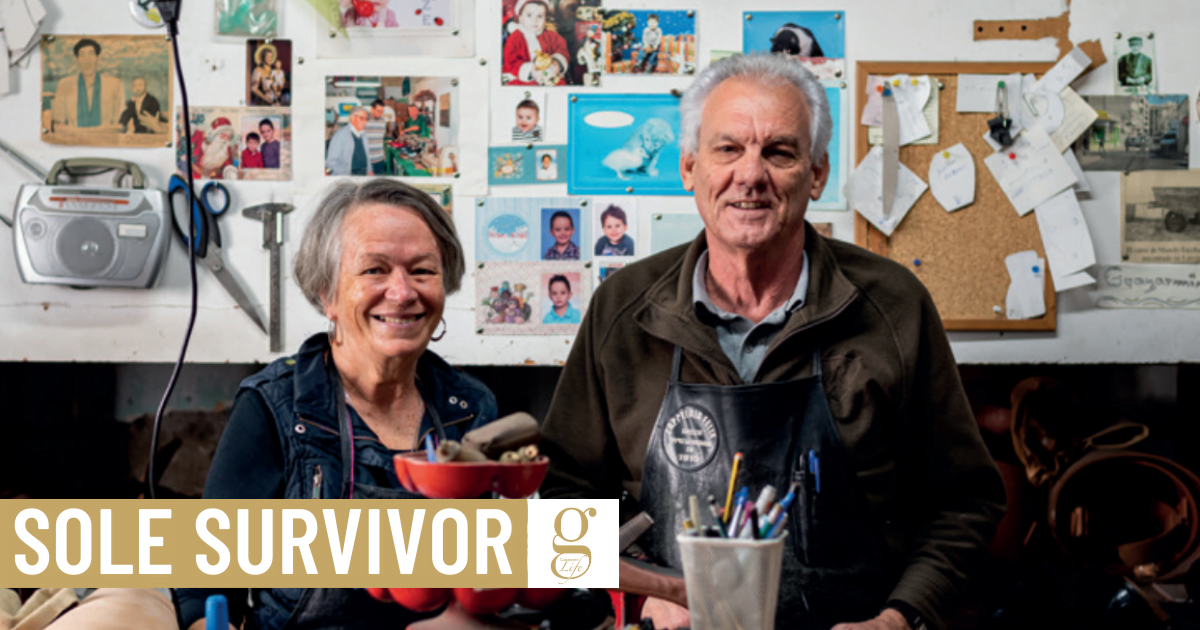 Félix’s wife Mari-Carmen deals with the customers, while Félix himself works in one of several backrooms. Until last year, customers were also greeted by Faycan, a friendly and much-beloved dog who died last year at the age of 19 and whose photo still hangs on the wall.

Everywhere you look there are the tools of the trade, hundreds of lasts – carved wooden forms in all shapes and sizes that were used in the shoemaking trade; machines, sheets of leather, scores of boxes of nails, eyelets, buckles and other metal items. There are also family photos, a photo of Marilyn Monroe and Félix the Cat, and a few posters for AC/DC and other rock groups “They’re my son’s,” says Félix “He’s a bit of a rocker. Me, not so much”.

Some of the equipment is fascinatingly ancient. Félix shows me a “goats foot” – a simple tool made of Cuban hardwood that is used to impart sheen to leather , and then points out a shiny black 19th-century pedal-operated Singer sewing machine from the United States that Mari-Carmen uses to stitch leather. Félix’s grandfather bought the machine from a travelling handyman in Mácher almost a century ago. “It’s 130 years old,” says Félix, “It still works perfectly and there’s nothing that does the job better,” he says.

Félix is the third generation of shoemakers, after the business was started by his grandfather in Mácher in 1915. His father took over in 1945, during the tough post-war years of poverty, and Félix opened the current premises in 1977.

And there’s no doubt that the shop is a living example of Lanzarote heritage. Félix shows me a pair of sandals that were jointly designed by his father and César Manrique, and an older black sandal whose sole is made of a car tyre. The older shoe is a classic example of a soleta, the sandals worn by field workers in Lanzarote. The Manrique design is based on this old sandal, but made of leather and incorporating a rosette motif that reflects the rosette-making tradition on Lanzarote. He still sells these sandals to folklore groups.

Félix shows us a pair of shoes that our photographer Sabrina instantly falls in love with, and explains that they are made to an English pattern that his grandfather used in the 1930s. When I ask him why Canarian traditional dress often features suede desert boots, he tells me that this is also a Canarian design, although more recent than the soletas.

Félix also made the harnesses and belts that the terrifying Diabletes wear when doing their rounds at carnival or in the streets of La Villa de Teguise , and casually mentions that he also created the huge platform heels worn by the first carnival drag queens on the island.

In the past, Félix would make shoes to measure, like his father and grandfather, but he explains that nowadays bespoke shoemaking isn’t economically viable because of the costs and outlay. “Leather comes in bundles, not sheets,” he explains, “I need to know I’m going to use all of it.”

While most of his work today involves repairs, Félix also creates harnesses, collars, reins and other leather items which are used by owners of camels, donkeys, mules and dogs. The camel harnesses are incredibly tough, made of Canadian buffalo leather, and are still used by the camel-herders in Uga. This is an almost unique craft in Europe.

I ask Félix whether the financial crisis means that more people are likely to have shoes repaired than buy new ones, but he shakes his head. “It’s the opposite,” he states. “Good times mean people buy good quality products, which are worth getting repaired. No one wants to pay to repair a cheap pair of shoes from a Chinese shop.”

Before we leave, Félix asks us to wait before rushing back with two pieces of amber, which he wants to give us as souvenirs. He explains that this is known as “Greek stone” in the trade, and is in fact the resin of a Brazilian tree that is melted down with wax to waterproof laces and stitching. He holds them to the light of the small wooden window, and they light up like amber jewels.

Félix is in pre-retirement – “I’m just waiting for la señorita to retire,” he explains, gesturing towards his wife. He doesn’t know what will happen to the shop when he retires. He’d love to see someone take over the trade, and would be willing to train them. When I mention that the shop is almost a living museum, he says “Maybe the Cabildo will notice.”

When he does retire, the island will have lost another true artisan – someone who can still do things that no machine can, such as adapt orthopaedic shoes for children and adults. And Arrecife will have lost a unique and irreplaceable shop.

The day it all stopped
Scroll to top