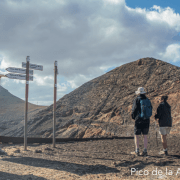 If you’re interested in exploring the wildest and most ancient parts of Lanzarote, then you need to head to Femés. The pretty little town nestles in the massif of Los Ajaches, the 11 million-year-old volcanic range that was the first part of Lanzarote to emerge from the sea.

Centuries ago, Femés was where natives ran to hide from raiding pirates, and also the first place that French and Spanish conquistadores settled on the Canaries, building a church there which was demolished by English pirates in 1534.

Today, it’s a quiet, civilised place, with a couple of bars and restaurants that do a decent business from tourists who pause to enjoy the views. However, relatively few of these visitors decide to go even higher up – a shame, as they’re missing one of the island’s most spectacular views.

Overlooking Femés on the seaward side is the Pico de la Aceituna, and a dirt track leads up the hillside to a ramshackle collection of buildings that are home to several goats. This is the starting point for some of the best walks on Lanzarote.

Here, you’ll see the Barranco del Higueral leading down to the distant sea in front of you. Barranco is the Spanish word for gully or ravine – a valley that’s often carved out by rainfall, and if you do descend you’ll find greenery that shows that this is still a run-off point for rainfall. However, the edges of the barranco also indicate that rainfall and resulting water flow was much greater in the past.

The walk down to the black sand of Playa del Paso and along the cliffs to Playa Quemada is one of the best two-car walks on the island, but serious hikers can also head all the way to Papagayo and Playa Blanca from this lofty viewpoint.

For a circular walk, take the hillside path skirting round the Pico de la Aceituna and the taller Pico Redondo and you’ll encounter several old ruined structures – piles of rocks that could have been created any time in the last ten centuries.

This dip is called the Degollada del Portugués. Although “degollada” means “cut-throat”, there’s no macabre story behind this name – it’s just a poetic Canarian description of a dip between two ridges. From here you can descend into the Barranco de la Casita before crossing back to El Higueral and clambering up the steep mountain ascent back to the goat farm.

Here on these quiet, ancient mountains there are stunning views of the plain of Playa Blanca and the coastline leading to Puerto del Carmen and Arrecife. The volcanoes reveal shades of bone white, brimstone yellow and bruised purple, and the only living things you’ll see are scampering lizards, chirping pipits and wagtails, soaring kestrels, the odd gang of goats and, if you’re very lucky, an Egyptian vulture.

Christmas in the sun
Ganjarote for allover health