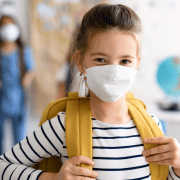 For thousands of kids on The Canaries, this month means a return to school after six long months. But Coronavirus means that things are going to be very different, and teachers, heads and education officials are facing an immense and daunting task – making school safe.

The new Canarian school term officially begins on 15th September. That’s a public holiday on Lanzarote, though, so most state schools here will open on the 16th, while many private schools will open a week earlier on the 9th.

Most children have not been in a classroom for six months, and schools, teachers and education authorities have been busy developing a plan to get kids back in class as safely and efficiently as possible.

And that’s not an easy task. Its already cost the job of one Canarian education Councillor, María Jose Guerra, who resigned after widespread criticism from unions and parents groups following what was described as “chaotic” management of lockdown measures. While private schools continued to teach online, most state education on the Canaries essentially stopped dead with the March lockdown, and plans to reopen certain classes failed.

The Canarian Education Council has developed a protocol that was last revised at the end of July, and which all schools are expected to follow – however, there is considerable “wiggle room” within the protocol, and every single school is also expected to draw up its own plan based on its own particular characteristics.

Limiting contact will also be a key element of the new school year, with children likely to be confined to the same classrooms instead of moving around, and school facilities will be divided into “blockable sectors”, meaning that areas can be closed off without affecting others.

Personal preventive measures include masks, the use of hand gel, and constant training in the hygiene measures necessary; while cleaning and ventilation are expected to be carried out as frequently as is practicable.

The protocol requires each school to appoint a member of staff who will be responsible for case management and all Covid-19 matters. This person will be required to stay informed about the pandemic, and will be charged with informing parents and health authorities about potential cases, as well as fielding enquiries and receiving information.

Timetables may also change, with the possibility of extra classes in the afternoons to compensate for smaller classes.

One advantage that Lanzarote has over most of the rest of Europe is the possibility of holding classes in the open air, which is mentioned as a priority in the protocol document.

“A challenge we must meet”

Private schools are also required to fulfil the national protocols. Jaime Rodríguez, the head of Colegio Arenas Internacional in Costa Teguise, says that it’s a challenge that he and his team have already been preparing for. “In the case of an outbreak, we may need to stop face-to face education again. We already did online classes during the lockdown – it’s a big challenge and not all pupils adapt well to it, but we know we can do it. We also had a summer camp earlier this summer which allowed us to trial various measures.”

The key phrase for primary school pupils is bubble groups. This concept means that children are kept in tight groups of their own age-group. The group will stay together during all school activities and children in the group can mix freely without masks. However, when they are likely to come into contact with other groups – for example, when moving about the school or in the playground – they must wear masks.

Roger Deign, at the Colegio Hispano Británico, says “Education is the basis of everything but schools are the ideal hothouses for infection”. He believes that the concept of “bubbles” is just as risky, and at the Hispano Británico he is developing a strict regime involving masks, antiseptic wipes and desks that each have their own perspex protective screen. Every child in a class will be assigned a number, queue in single file and enter the classroom one by one to fill desks, starting at the back of the classroom.

If a case is detected, the pupils on adjacent desks will be classed as close contacts following the same principle that operates with aeroplane seats. Pupils will also be given temperature checks several times a day.

Jaime Rodríguez says Arenas Internacional will be restricting mobility within the school drastically. Children will need to stick to clearly marked routes and paths around the school grounds and parents are forbidden to enter at all. In classes where items must be shared. For example, science labs, disinfection will be a priority.

“There is fear on both sides,” says Rodríguez. “First, there are parents who fear that their children will miss out on education and who don’t want them to wear masks; then there are those parents who I’d describe as “healthily paranoid” about the virus. We’ve got to find a way to convince both of those sides and everyone on the spectrum in between.”

Roger Deign uses stronger terms: “This is war, “ he says. “The virus is a killer, and we’ve already seen an eight-year old child die of it in Spain. Imagine having that on your conscience.”