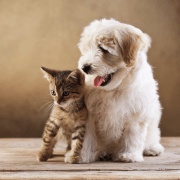 Pet owners on Lanzarote should always remember that their animals are not native to the island, and that this means extra care is required to protect both them and the locals animals that they can threaten.

Lanzarote has long traditions of both dog and cat ownership. The idea that the islands are actually named after dogs seems to be based on misleading reports from early Roman expeditions to the island, in which lobos de mar (sea lions) were identified as dogs.

Nevertheless, the native Guanches kept dogs, probably to guard livestock, and even ate them. In the 16th century the first reference to the mastiff known as Presa Canario was made, when official papers charged a local farmer who owned two of the dogs to hunt down wild dogs that had been killing livestock.

The Presa Canario became a popular breed for guarding livestock, and if you see it now, there’s a good chance it will be a miserable guard dog, tethered to a stake by a chain with a little shade if its lucky. Later, when British merchants brought their “sports” to the islands, it was used in dogfights. Although it was used as a hunting dog on occasion, this role was far more often given to the Canarian podenco.

The podenco, a direct relative of the large greyhound-like North African hunting dogs, has brilliant senses of smell and hearing, and is fast and hardy. Still used by hunters today, it is also one of the most widely mistreated species on the island, often abandoned or killed if it is not a good hunter or becomes too old or injured to hunt.

Both Podencos and Presos have escaped and managed to live in the wild, where they have occasionally terrorised livestock. However, while feral dog populations on the islands may have been a problem in the past, they rarely cause trouble today.

Cats have also been on the island for centuries. It’s likely that they were brought on ships and have existed in feral colonies for almost the amount of time they’ve been here.

Nevertheless, the current feral population is likely to be descended from far more recent arrivals, and these cats are frequently unadapted to living in the hot Canarian climate.

Feral cats here usually live short, brutal lives, and they are subject to conditions such as skin cancer caused by the sunshine as well as feline AIDS, distemper and other diseases. The key is to reduce their number humanely and that can only be done by neutering and spaying them before returning them to the wild.

Cats are also classed as an invasive species here and feral populations, along with rats, are likely to be at least partially responsible for the past extinction of Canarian species such as
the Lava Shearwater, the Canary Islands Quail, the Tenerife Giant Lizard and Fuerteventura’s Lava Mouse.

Cats can still cause havoc, with a single feral specimen recorded as virtually wiping out a colony of shearwaters in the north of the island in recent years. While they can be useful for controlling mice and cockroaches, they can also be very bad news for any small birds, lizards or geckos in their immediate territory. If your cat starts to offer you unwanted presents – as is usual for these natural hunters – it may be time to consider getting a bell for its collar.

“No new outbreak in Canaries”
Scroll to top