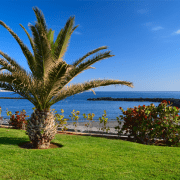 The Canarian palm tree (Phoenix Canariensis) is not only the official emblem of the Canary Islands, it’s an unofficial symbol of subtropical leisure and beauty for the millions of visitors to the islands.

Although Canarian palms are found all over Lanzarote, their most famous home is the valley in which the little town of Haría nestles, which is often called “The Valley of a Thousand Palms”. In fact, this name is a considerable understatement. A local Haría legend tells of a schoolteacher who sent his pupils out to count the palms in the area and ended up with a total of 10,000, while a more recent 2018 palm tree census registered 58,616 Canarian palms on Lanzarote, and a glimpse at the fascinating online map that resulted from this project shows a heavy concentration of palms in Haría.

The Canarian palm bears fruits that are similar to dates, but which are smaller and yellow-coloured. These fruits are called támaras and are inedible for humans, but are often used to feed livestock.

The Canarian palm also produces sweet sap, which is tapped for a drink called guarapo or turned into “palm honey” on the isle of La Gomera. However, its most useful product is undoubtedly its tough, fibrous leaves, which have been used in weaving, basketry and other crafts for centuries.

In the heart of Haría it’s still possible to see Eulogio Concepción, the island’s last professional basket weaver, working in his studio near César Manrique’s house, and a visit to the town’s craft market will often reveal older women making sombreros and other items with much finer palm leaves.

Your own palm tree

Canarian palms make excellent houseplants as well as garden trees, and are a fixture in the elegant prewar palm lounges often found in hotels.

It’s possible to grow Canarian palms from seed, but this is not a fast-growing tree, so it’ll require a lot of patience. You’re much better off buying a readygrown one of about a metre high. Kept inside, it will require well-drained soil , filtered light, and specialised fertiliser that should be available at local garden centres. The palm can be repotted every two or three years until it reaches a height of around two metres.

Outdoors, the sky is the limit – Canarian palms can reach 40 metres in height , and that means that, while they’re too big for most gardens, if you’ve got the space this is a real statement. With limited space, you may want to think about a container.

Warning: Canarian palms have sharp spiky leaves that can be extremely hazardous at eye-level.

Elegy for a palm tree in the wind

In his 1928 book, Lancelot 28º-7, the poet Agustín Espínosa dedicated a poem to the palm trees of Lanzarote, hailing them as the “first among all things to have learnt the art of whirling around a fixed point.”

Let your green arms whirl beneath the wind…
You are, now, the only propellor, the only
carousel, the only roulette wheel that spins for
the sake of spinning

Mr Brown and Mr Green
No explanations for Canarian exception

Need to Know: The General Hospital
Scroll to top