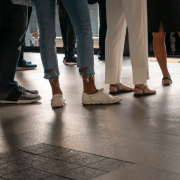 In the age of social distancing and limited numbers in shops and other places, queueing is likely to become a more frequent part of our lives. Here’s how to do it in Spain:

The British often pride themselves on being the only nation that knows how to queue properly. They’re wrong, of course. They’re just good at the primitive form of queueing that involves standing in a line. This still happens here on Lanzarote, most commonly at supermarket check-outs and airport check-ins, and there is very little difference between how different nationalities do it.

“Quien es el ultimo” means “Who’s last”, and is the key to the Spanish style of queueing. When you walk into a place where a seemingly unorganised mob of people are loitering, just ask this question out loud. Someone should answer by saying “Yo” or just lifting a hand, and all you have to do is keep an eye on them. Don’t forget to listen for the person who arrives after you to ask the same question, and to respond. Then just do what you like and sit where you like until your turn comes.

Tickets are an increasingly popular way of managing queues in public offices or supermarket deli counters. Just take a ticket from the dispenser and wait for your number to flash up on an LED screen or just to be called out. You’ll soon get an idea of how long you’ll have to wait and may decide you have time to nip off and do other things until your number comes up. However, the golden rule that the queue you’re not in moves faster also applies here, with numbers moving much more quickly once you’re away.